Yesterday was another (beauty) training day for cross country skiing. We went up to the nordic centre midmorning to test skis and re-inspect the courses. The final day of competition was today (Saturday) and was the relay event! The relay consisted of 4×3.75k legs, the first two in classic technique and the second two in skate. The men did 4x5k, in the same format.

Course markers on training day, bright and sunny once again

This morning it was a bit cooler than earlier this week. Since the entire venue gets locked up at night, our ski bags live outside beside the waxing trailers. They were all frosty when we arrived, it looked pretty cool.

For our relay, I was given the scramble (first) leg with Bella skiing the second classic leg, then Heidi and Alannah skating.

It was a bit of a mis-matched race for me. My “plan” was to TT to the top of the course and survive the way down. It sort of worked, I was good until about 100m from the top when I tied up real bad and Katherine (QC) and Kendra (YT) pulled up and moved in front of me. I did my best to keep up with them through the rollers and on the way back down, but took an unexpected spill (unexpected because I usually foresee my crashes) on a sweeping right hander as I was exiting.

Crashing was a bit alarming, especially since I fell on my right side. I took a mental moment as I got up to make sure I was okay and my leg wasn’t rebroken (all good). I fell on a downhill that runs into a climb, so the fall left me pretty rattled and I struggled to get my stride back for the last few climbs on the way to the handoff. I still tagged Bella off in third, despite my tumble. 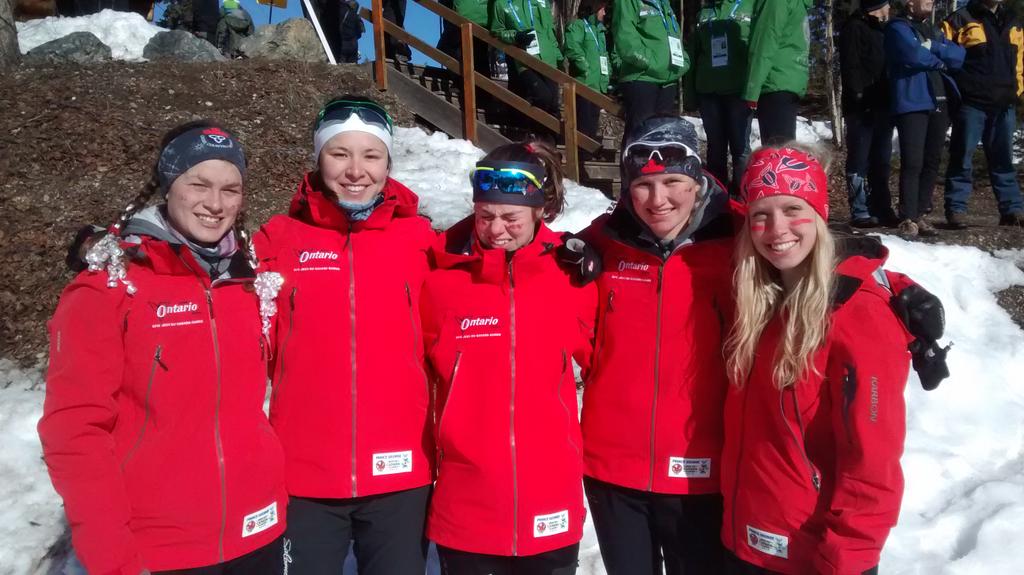 In the end we wound up 5th, the same position that Ontario finished in the last Games in Halifax. Our boys relay team was also ranked 5th to start, but were heavy favourites to win this time around. Their line-up had Ben and Scott skiing classic, then Jack on the skate with Evan as the anchor.

Ben skied a strong first leg, passing off to Scott with a few seconds advantage over the Yukon team, then Scotty put in a strong classic lap to extend their lead over the chasing pack (Yukon, Quebec, BC) to nearly a minute. All our team staff and the girls team were out on course cheering for them; foregoing a ski cooldown in favour of sprinting around the trails trying to watch in as many places as possible.

Jack and Evan both raced well around the 5k loop to maintain a 45s lead to the finish where Dave gave Evan am Ontario flag to ski into the finish with. It was pretty cool and a lot of fun to watch. Ben, Scott, and Evan are all on the NDC in Thunder Bay, and Jack trained in Thunder Bay for three seasons, moving the Canmore to train this year with the AWCA. It was exciting to see these guys pull off such an impressive race.

And this brings the 2015 Canada Winter Games to an end. Overall, I think it was a successful week for Ontario’s cross country skiers – 2 gold, 3 silver, and a bundle of Paranordic medals. Even though I didn’t perform as well as I’d hoped in the distance races and relay, I’m still happy with where I am and what I accomplished during the Games. Being able to come back from my injury to compete at, and above where I was before feels great. I really hope that everyone else at the Games also had a positive experience and will carry that spirit to Nationals in a couple weeks back in Thunder Bay!

Thanks for following my posts this week, hopefully you were able to see a bit more of the Games than what comes out in the newspapers and from those all too infrequent phone calls from your kids.