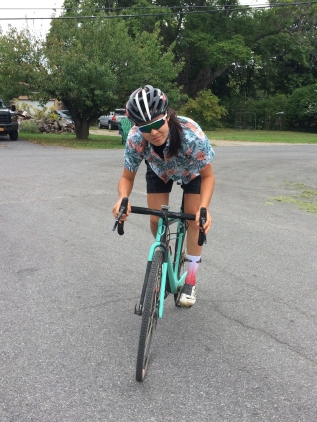 Jennifer Jackson, but most call me Jenn, others call me Jackson, some call me JJ, and some just bark…  Spent several years trying to be a really fast cross country skier, but then discovered mountain biking was much more fun. Currently working on being a world class cyclist, fixing bikes part time at Spoke, enjoying the outdoors and always trying to remember to call my family more often.

Aspire to live a fulfilling life, keep the expectations low but hopes high, and work on dreams.

From 2013-2016, I was a member of the Thunder Bay National Team Development Centre for cross country skiing, and then went on to train and compete independently in 2017. Those four seasons were highlighted by representing Canada at two World Championships, 7 World Cup starts, a Canada Games gold medal, two Junior National titles, one U23 National title, and multiple National and NorAm podiums. While in Thunder Bay, I also completed my Mechanical Engineering Technologists Diploma at Lakehead University. What I learned in my skiing pursuits and subsequent burnout has shaped much of my attitude towards what it means to be an athlete and the life I aspire to live.

Summer 2017 saw the start of a new athletic chapter in mountain biking. Pages turned quickly as the season turned into a highlight reel with a U23 National Championship title, two silver medals and a bronze at the Canada Summer Games, and qualification for the World Championships. Unfortunately the dream debut season came to a jarring halt at the World Cup in Mont Sainte-Anne with a broken knee-cap that would put me out for rest of the year.

For 2018, the year started with an exciting win at the classic Paris to Ancaster gravel race in April. From there it was back on the trails for a string of podiums brought me to the top of the Canada Cup Series board – a mark of improvement and consistency as a first year Elite. The summer concluded with a Provincial Championship title, a 150km 8 Hour Solo, and a race of epic proportions at the Oz Trails Off-Road.

In the fall, I dove in to my fist cyclocross season which brought surprise 5th and 2nd place finishes at the PanAmerican and National Championships, respectively. With these results, I qualified to represent Canada on the World Cup during Kerstperiod (a condensed period of 2 World Cups and 3 big C1 races in Belgium). It was an amazing experience, I learned an indigestible amount about bike racing, notched some exciting results, and will undoubtably pursue more cyclocross next year.

Through the 2018-19 academic year, I attended Georgian College full-time in the Environmental Technology program, worked part-time for good and necessary measure, and banked training hours to get ready for 2019. In April, I defended my Paris to Ancaster title, but even more proudly contested within the overall lead group. Over the summer, I raced the full European World Cup calendar as well as the World Championships in Mont Sainte Anne, posting up a staggering number of 31st and 32nd place finishes, and domestically earning my first UCI wins. Nationals was a bit of a heartbreaker race, but with the event returning to Hardwood again in 2020, I am already looking forward to another chance.

Fall 2019 was my first full domestic cyclocross season with the Easton-Giant p/b TLC UCI team across North America. My system was fully shocked after landing 10th and 7th at the opening World Cup rounds, forcing upon myself the question – should I invest more into pursuing cyclocross? Straining for motivation as the racing continued into late fall, I rallied to put together one of my best races ever at Nationals where I finished second – the same position as last year, but a very different battle. A 5th at the PanAmerican Championships would conclude the focus period of my cyclocross season for the year.

For 2020, I signed on with Norco as an ambassador and developing rider with the Factory Team. With the season put on hold until the fall, and not knowing “what to do with my life” and the world seemingly on hold, I made a split decision to move to Kamloops, BC for the summer. It was a great choice, I spent the most hectic bike-season ever working in a very mountain bike oriented shop where I gleaned oodles of knowledge, and gain even more experience. The same came with my riding, training in a new environment, challenging myself on new trails and terrain. Everything about the move pushed me to grow and become more confident on and around bikes.

Late September I travelled to Europe with the Norco crew for the World Cup Mountain Bike season which was held in a very short, sharp block of races in the Czech Republic and Austria. I earned my first XCO Top 30, marking a small but significant step forward from my first year of World Cup racing in 2019.

2021 started with a big-pull in Europe to limit overseas travel and time confined in quarantine returning to Canada. Together with Team Friendship (Sandra Walter and Catharine Pendrel – two of my best friends and mentors), we spent the better part of 3 months travelling, training, and racing together across central Europe, competing in a variety of World Cup, Swiss, French, and Italian series races. It was an enormous dose of experience, with some big PB’s  including a 27th at the Nove Mesto World Cup, and 4th at the Granichen HC Swiss Cup, and also some low periods of motivation and homesickness.

The tail end of the summer I found myself dragging and in a tough spot, but with the season wrapping up with the National Championships in Baie Saint Paul, I mustered one of my best performances ever, raced out of my skin, and was able to win my first Elite title. It was a combination of the right course, the right motivation, mindset, and moment for it all to come together. Realizing that dream, and being able to show up on the day that mattered was incredible.

Unfortunately, due to injury, I wasn’t able to race cyclocross in the fall, but was given a huge lift in signing to ride for Canyon MTB Racing in 2022 alongside Emily Batty. This is a super exciting opportunity for me to be teammates with one of Canada’s best and most successful mountain bikers, and have the support to compete at the highest level without compromise. The positive energy is palpable with this team, and the outlook for the upcoming season is bright!

Please check out the blog for news, updates, and a little more flavour of life.

On the skinny skis…