A little sunshine and short sleeve rides was exactly what I needed to get myself back in gear after the end of Jersey Season. Ruts n’ Guts and Resolution CX were two of the most best race weekends of the year, and also put a nice wrap on the North American season for our team.

It felt like my season wrapped up after Nationals and PanAms, so to be back for back-to-back events only a few weeks later was a bit odd… But given that I’d been promised warm, dry “early season” conditions, light showings in the UCI categories, and a fun, chill week with the crew – it was impossible to say no! Only two of those things held true.

Ruts n Guts was one of, if not the wettest, muddiest races of the year. What in the past was described as a “small creek”, was a lake encompassing so much of the park they had to reroute sections where the water got too deep to ride through. The course was fun, but I imagine at speed it would’ve been a blast to rip around. Now, I shoudn’t really complain – I have found a place where I’m pretty comfortable and happy racing in the mud, and I was stoked to be back between the tape. But man, Avery (our mechanic) has had too many of these races in his first season doing ‘cross than some mechanics have in years. 4th and 2nd, a painful but good way to get myself off the couch and back building fitness. Michael went 1-2 on the weekend, his first US podiums of the year! 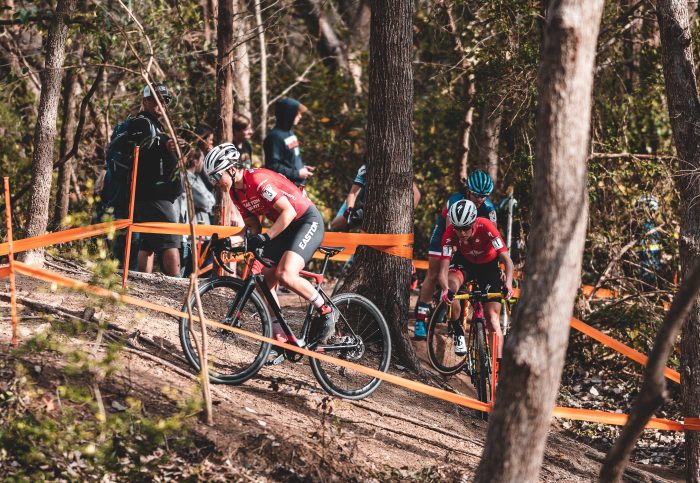 The second weekend, Resolution CX in Texas, brought out proper hitter fields and the promised southern weather. I felt markedly better, more spunk in my legs and focus behind my eyes than at Ruts. The course was fast, lots of cornering, some single-track-like sections through the woods, and a super steep run(or ride?)-up that I attempted and goofed more times than I made, but for the stoke level of the fans the times I did clear the hill it was totally worth it. So 5th and 3rd (I think). I was racing, like really racing, and that got me fired up as much as anything. Michael did a double 1-1, and Dylan nabbed two top 10s – so best weekends of the year for those guys I reckon. No nonsense in the pits for Avery… couldn’t really have asked for a nicer way to wrap up our last weekend all together as a team.

Michael and Avery will be in Belgium over Christmas. Dylan is done for the year. Bridget has qualified for Worlds; where she’ll race in the first ever Junior Women’s Cyclocross World Championships! And I’m home for the holidays, then Spain in January to log some on-bike time before the Hoogerheide World Cup and World Championships in Switzerland. I’m anxious to ride, this will be the first year I spend a block of time over the winter on the bike, rather than skiing and being on the trainer. Hopefully it helps me roll into the early 2020 season with better legs and a fresh mind!