It’s real – 2nd place at Nationals! This feels like a win for me. 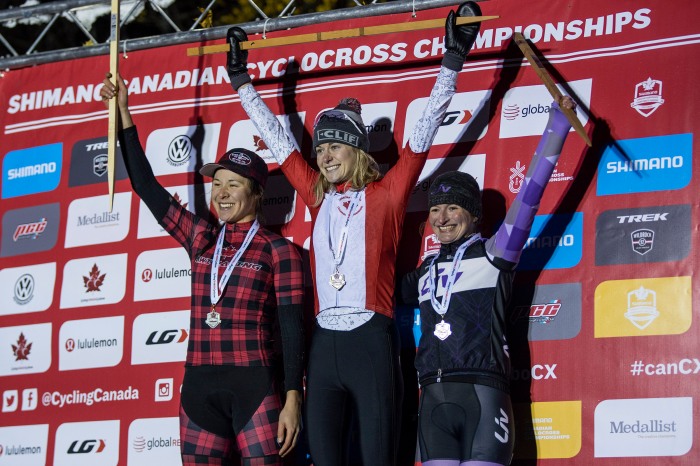 Before I write much about my race, I want to shout out to my teammate Brody Sanderson for his rides this weekend. Brody had to take most of the cross season off to recover after being in an accident with a car while out for a training ride in September. He placed 6th in the U23 Championship on Saturday, then 8th in the combined Elite field Sunday – as he might say “could be better, could be worse”. I was totally stoked to have Brody back at the races and appreciated the advice and laughs with him and Andrew in our surprisingly legit improvised team-tarp-tent set up. Send or be sent.

I don’t take layering advice from Brody, especially when it’s 0C and snowing.

I had a really busy “life” week after PanAms, and sometime during the stress of it all, I had a bit of a realisation… In those races, I was so determined to move as far up the field as possible that I didn’t think about who and how I was leaving behind me. Cross specialists, pro roadies, World Cup mountain bikers… it didn’t matter, I was just there to race and was so engrossed in the competition that all the details blurred together. I found a similar place at Nationals this weekend, perhaps to a slightly lesser degree because PanAms gave me some context and perspective on where I stood within the field, but I still felt far more ready to race than I did for most mountain bike races this summer. Because the race all sort of blurs together, it’s hard to make an accurate recount of it, but I know it was awesome – I was buzzed all night after it and couldn’t sleep a wink. 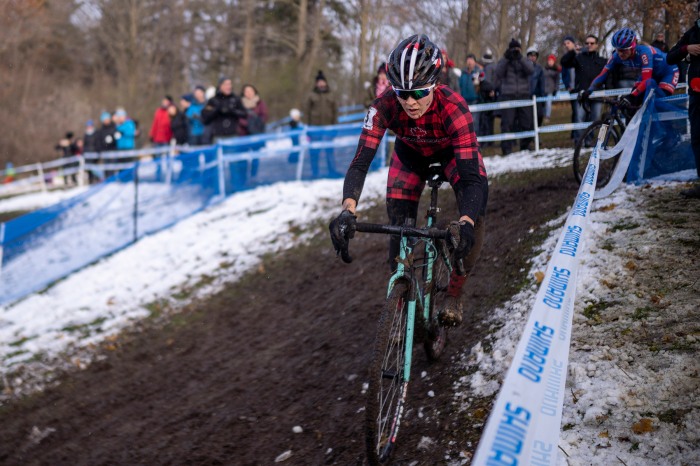 The organizers created an awesome course for us in Peterborough, I think it was my favourite of the year. The terrain and variety of fast and technical features was fun and challenging. Sadly for what I imagine was once I nice green field… as the cyclists arrived, snow fell, melted, turning to mud, tacked up, froze, thawed, then turned to mud again… Hopefully they get a warm spell to aerate and put down grass seed where we were riding. These ever changing conditions forced a lot of improvised learning for me. Between the conditions and competition, I’ve gained an almost indigestible amount of experience.

When Maghalie Rochette darted ahead of the field off the line, Sandra Walter was quick on her wheel, but it wasn’t long before Mag shook her off and was on her way to a most well-earned National title. After the race I watched some videos of her riding and it was mind-boggling how smooth and fast she took the slippery corners I was gingerly picking my way through. It is very cool to see someone commit 100% to their goals, like Maghalie has done with cyclocross, and watch them soar up to what seems like an almost unattainable level from the wayside.

Soon after, Sandra and I found ourselves locked in what felt (and hopefully looked) like an epic back-and-forth battle. The timing of when and how we would trade leads is muddled, but I know the run-ups were where I held my biggest advantage. I desperately needed the extra seconds on foot, as it felt like I was constantly making mistakes in the mud and was losing most of my time to Sandra through the fast greasy turns. Down to the last lap, I wanted to lead into the second half of the course that had two run-ups (one of which Sandra was very determined to ride 😆) and long off-cambers, to maximise the time I could open before the finish or limit potential damage should I have trouble.

This was wheel-to-wheel racing.

Maybe it was the running, but I think part of it was also that I really really really wanted to win this race for second. In the moment, it didn’t matter so much that I would get a silver medal at the end, but it was really important that I fought harder, that I show PanAms was not a fluke, and that I prove to myself that I can win race-long battles. I’m so happy I was able to do all that. My riding can definitely still be refined – I’ll be the first to tell you I need more practice to squash bad reflexes before they become habits. For now though, it’s enough to be pretty close. Run ups though, they’re no joke.

It’s exciting to have a result like this come together, and in some ways it feels like some sort of miraculous arrival at a higher level of competition. In another way it feels like I’ve been slowly building up to this through the mountain bike season until now. And in another, which I lean to the most, is that I just found a discipline weird enough to suit my slightly above average cycling and bike handling abilities, sendometer tuning, and general athleticism #lifestyleathlete 😉.

In any case, I will take some reassurance from this that we’re trending in the right direction and have found even more ways to become a better bike racer. I’m proud of and grateful for everything that came from this weekend of riding bikes in the snow and mud in Peterborough at CX Nationals. I will now be spending the better part of this week overhauling my bike and trying to wash all the mud out of my kit. Definitely will play again.

‘Til later folks, thank you for being here.

One thought on “Cyclocross National Championships”