The second half of the Tour took a turn for the better. You won’t recognize that on the result sheet though, those were still pretty bad. But my mindset was considerably better. Was I still frustrated that I felt and was racing so poorly? Absolutely. Was I racking my brain and agonizing over it? Nope. Not as much at least.

I think the key to making that mental recovery was letting my hopes and goals go. It doesn’t sound good, and it is sort of sad; giving up on trying to compete alongside everyone else. But the reality of the situation was that I was in no state to be trying to compete and compare myself to the best in the world, let alone my Canadian teammates. So I reevaluated: I made some new goals, set my own quiet objectives, and went about my own business as best I could.

I didn’t make it through to the end of the Tour, which is a bummer, but is also okay. I made it to the start, and through to the finish of every race I had to the opportunity to race, no matter how I felt and what kind of motivation I had to be there. I was committed to being there right through to the end (not that I wanted to be on course for as long as I was most days…).

The Tour is over now, and everything I went through there is fuel for the fire. Hopefully things will burn brighter for me at Nationals.

Yesterday our team arrived in Whitehorse, Yukon, for the Canadian National Championships. I came directly from Canmore, after spending a few days recouping from Ski Tour. We travelled on a charter with most of the athletes from Alberta, and arrived to be greeted by teams who arrived from Ottawa shortly before us. It was a bit of a wait for the baggage carousel, but most of our stuff arrived.

For accommodation, our team has rented out a hostel called the Beez Knee’s, it’s pretty cozy. The guys on our team are staying there, and the girls at a hotel across the road. We are doing all of our meals at the Beez Knee’s (we have chef Marley along to take care of us!), but had to fend for ourselves last night after arriving.

Best $1 ever spent on 6 donuts

Today we went to the race site to test skate skis and do a bit of course recon. I didn’t take any pictures during training, but do have a couple candids from before we started and at the hostel after our morning ski. 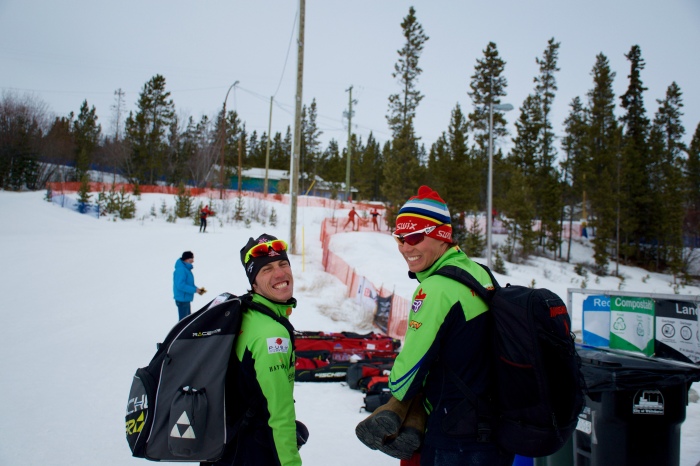 Chilling at the Beez Knee’s