With two weekends of racing under my belt, I’m already three months ahead of schedule from last year – where I didn’t really get racing until mid-February. Needless to say, this season has started off on a much better foot than last year (pardon the pun).

My first weekend of competitions (Nov 27-28) were in West Yellowstone, Montana. It was very cold and I couldn’t take any pictures because my phone and camera batteries aren’t very resilient…

Racing went well for me in Yellowstone. I skied to 2nd place in the skate sprint qualifier – the course was fast and flow-y, and the competition stiff. I was edged by just 0.02s from making the A final, finishing my day in 7th place. Still a very respectable finish, a good place to start the year.

The distance race was tougher. Racing at over 2000m didn’t knock me to my knees and leave me keeling on the ground, but instead just made me feel pretty lame and without the gears I needed to get around the 10km course. I placed 22nd in the event, just 1s ahead of fellow Canadian Dahria Beatty who was on the sprint podium the previous day.

And then it was off to Canmore…

Hoar frost trailside on our first day in Canmore

Upon arrival in Canmore, we spent the early part of the week doing some easy skiing and testing, and were reunited with our teammates who, instead of racing in West Yellowstone, spent a week training in Silver Star before driving to Canmore for the NorAm.

It was exciting to see everyone again; our team, now with 13 athletes, feeling much bigger and with lots of good energy.

Sadie, Katherine, me, and Mia, working the selfie stick 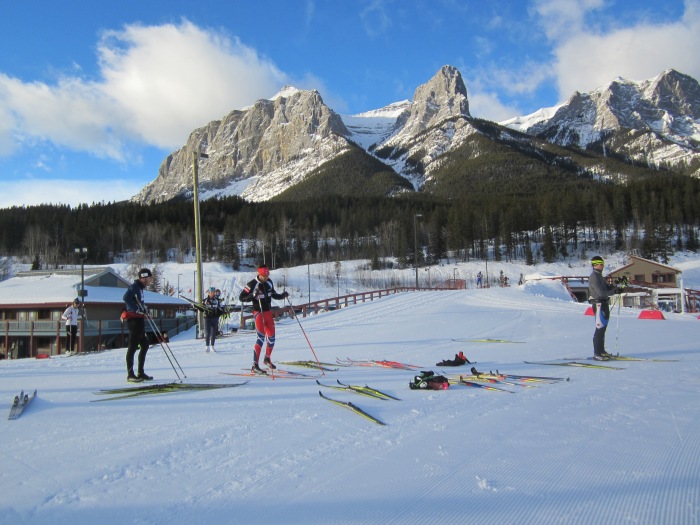 Here is a short video from a day or two before the 5/10k classic races – taking a quick look inside the NDC waxroom, which has been a very busy place.

The build up to the 5k classic was interesting. Set on a course without any significant steep climbs, double poling was very much in the cards, even for the women’s race. I spent the days leading up to the race, right up until the morning of, flip-flopping between double poling on skate skis, or sticking with classic skis with kick wax.

When it came time, I chickened out and went for the classic skis. The main points that led me to this decision were that:
a) I didn’t start until 11:51 – so the conditions were warmer and slower
b) The wind through the stadium was quite strong
c) The track was soft and poles were sinking in quite badly
d) It’s not February of last year when I’d DP almost anything

Walking away from the badass points I would’ve earned by DP’ing the race was le sad, but I still think striding was the right decision, given the conditions. Had the women raced first thing in the morning, before the men, I think I would’ve gone for it. Next time I guess : )

Here is a short video, catching up with Katherine – who placed 2nd in Sr. women, Sadie – who won Jr. women, and myself – who won a pie for being 4th in the Sr. women’s 5k.

The second day of racing saw women take to a 9.6km freestyle mass start and the men a 16.5k race. Ryan, as a first year Jr. man, skied to a strong 5th place finish, less than 15s from the podium – I was pretty psyched for him!

Ryan ripping through the stadium (W.J.Maclean)

I guess you could say my race was going well until it wasn’t. I held position in the lead group until 6 or 7k when I started to fall back on the longer climbs. I tried to bridge back to the leaders a couple times, pushing hard through the flats and into hills where a group of skiers will naturally bunch and slow down, but to no avail.

Midway through the race, still hanging in the lead group (W.J.Maclean)

Being able to ski in a pack of 10-12 skiers for the better part of the race is something I’ve never experienced before. So while my time with the leaders was shorter than I would’ve liked, there was certainly more learning value to it than just being reminded I wasn’t fast enough to hang with the pace on the day.

Feeling and looking a little defeated at the finish (W.J.Maclean)

Racing can be tough. And as I alluded to at the beginning of this post (if you can recall), this season is already way ahead of last year. So while racing at less than my best can be frustrating, it only takes me a few moments to remind myself how much more difficult being completely out of the game is. It gives me a sense of calm, and reminds me that there is far less consequence to having a poor race than there is potential when you have an outstanding one.

It’s going to be all-hands-on-deck for our team tomorrow with finicky weather in the forecast for the classic sprints. But the NDC support team has been well fuelled with bacon, pie, and cookies, so rest assured the skis will be good.

I should really be studying for my exams now, so I’ll leave off here and hopefully get an update late next week on how things go in Silver Star. If you can’t wait that long, results can be followed on http://www.zone4.ca,for general team updates and results you can follow the team Twitter @NDCTBay, or for general nonsense from me @JennJackkson on Twitter.