After the first day of downpour in Mont Saint Anne, we had much better fortune with the weather. For all but one of the following thirteen days of training we were graced with sunshine and rainbows, and icecream.

We made several trips to the Bar Laitier (literally, the Dairy Bar. amazing) in Beaupre – just down the road from MSA to beat the heat. They serve up some top-notch soft ice cream that you can get drizzled in different chocolates, caramel, or even Oreos… Even with my very limited french vocabulary, I was able to indicate to the server that I wanted the same thing as Kendra (awkward pointing et moi aussi-ing).

Single serve ice cream is rather expensive, so towards the end of the trip we resorted to the slightly more economical option of buying ice cream from the grocery store. 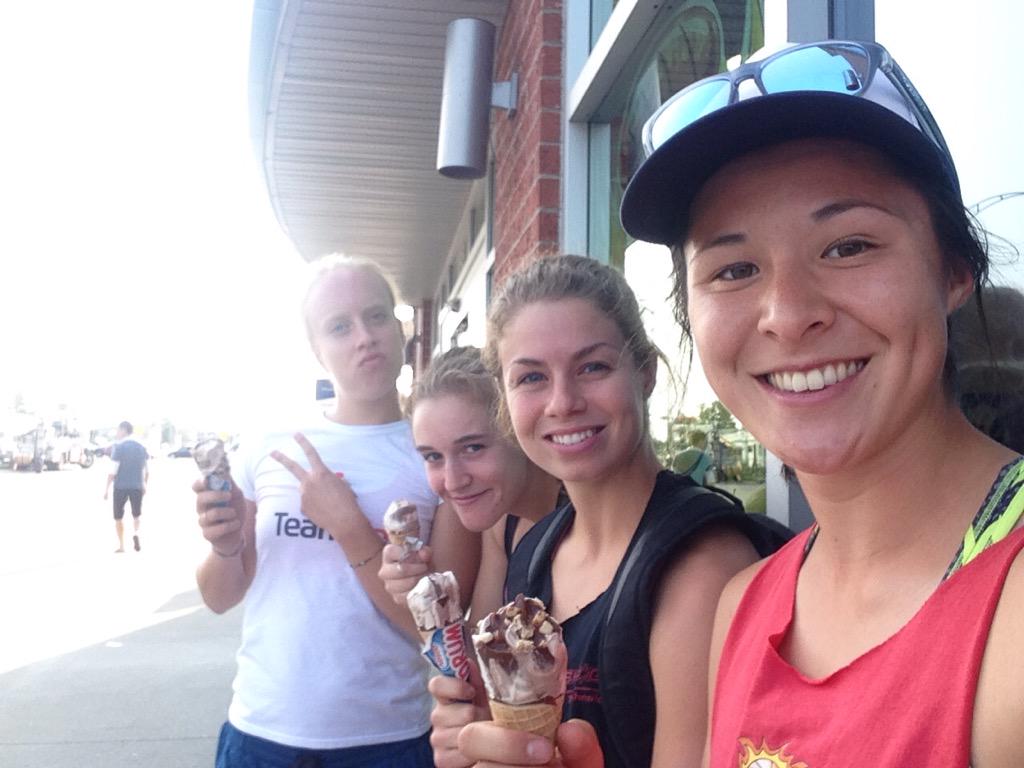 NDC squad turning up for ice cream, still working on the selfie game

Other than eating icecream, making friendship bracelets, and braiding each other’s hair, we also did a grind of an intensity workout at the Chutes Montmorency, and a rollerski time trial on the penultimate day of the camp. 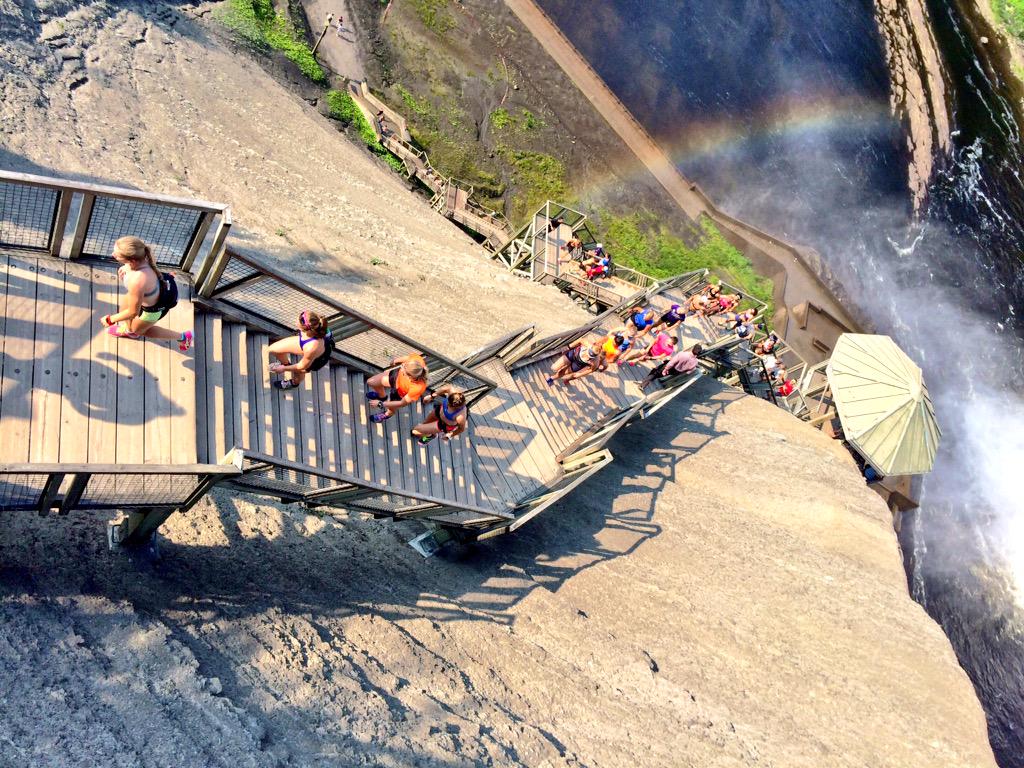 Pretty picture of a not so wonderful workout, le sigh (AWCA photo)

The stair workout at the Chutes (or waterfall) didn’t go terribly well for me, but I bounced back to have a good time trial a few days later. The TT was two laps of the lower section, a lap of the stadium, then two laps of the top at the roller ski track. My focus for the TT was to ski with a lot of power on the fast, flowing sections, then stay comfortable on the hill for the lower two laps. Then, moving onto the upper two laps (a monster hill, followed by a technical descent) I built up my effort on the first climb so I could make a good push at the end rather than struggling to drag myself over the line.

Obligatory photo after a long paragraph – group shot from our evening in Quebec City, check the rad photobomber (Pav photo)

You could say I skied the TT so I would feel good about myself when I crossed the line. Low risk, I suppose… Rather than leaving the camp feeling discouraged about my form. That said – there are definitely things I could’ve attempted to ski a faster time, but those things come with a risk of doing worse than I actually did by doing it the safe way. While it is important to have opportunities to push and test yourself in the summer, the off season is really about building yourself up – physically and mentally, so you can be in good form and feel confident going into the race season. So whether that be going right to the edge and putting yourself on the spot, or saving that extra dig for when it counts, it’s important to figure out what works for you.

Alannah and I built ourselves up with a solid 3hr, 50k double pole workout. Look how tough it made us.

After the camp wrapped up, I spent a couple days with Cendrine Brown and Mathilde Petitjean from the CNEPH team before heading further east to PEI with my parents.

In PEI we took part in a 3-day Gran Fondo ride. The main event on Saturday was a 147k race/ride from Charlottetown up to the north shore and back, with shoulder rides on Friday and Sunday. It was a bucket of fun; I had a really excellent time and met nice people from across the continent!

I was a bit nervous for the main ride on Saturday. Given that I’ve logged less than 250km on the road this year, and never farther than 83km, this was a large undertaking. Fortunately, all went well. I rode with my Mom and joined up with a few other gents to form a group that would flux from 3-6 depending whether we were going up, down, or on a flat.

We completed the course in 5:08 and Dad – who rode with a faster group, met us at the finish. Out on course, they had a couple preems – marked sections where they chip time you and the fastest people over those sections win a King/Queen of the Mountain’s or Sprint jersey, regardless of where they are actually riding in the race.

Survived the big ride! Super fun weekend with my parents.

I attempted both the KOM and sprint, and was quite surprised to win the KOM (QOM)! Since my lack of preparation for the event certainly did not set me up for this success, I attribute my climbing ability over the 950m uphill race to the copious amount of pro-cycling races and videos I have watched over of the past couple months. By the time I got to the 350m sprint at the end I was so gassed and couldn’t put anything into the pedals. Next time…

Pano at the winery we stopped at for the Friday shoulder ride. The weather was stunning all weekend.

I am now on my way back to Thunder Bay to rejoin the team as we prepare for re-testing week. School also starts soon; I should probably look into that…

Anyway, thanks for reading, it’s been a jam-packed summer and winter is just around the corner. After testing week, a few people from our team are heading to Park City for another dryland camp. I will not be going, opting to stay in town and settle in until our on snow camp in early November at Foret Montmorency.

Oh and – Mom surprised me with a selfie-stick as a gift when they picked me up from Quebec. Hopefully this will help me raise my game.