Last weekend, Team Hardwood had their kick-off camp which focussed on testing and learning (not necessarily in that order). The summer program is mostly Hardwood skiers, but there are also a handful of athletes from other clubs who have joined in for the larger training group and consistent coaching through the dryland season. I’m pretty psyched about the program, and all I did was hold a clipboard for a couple days. 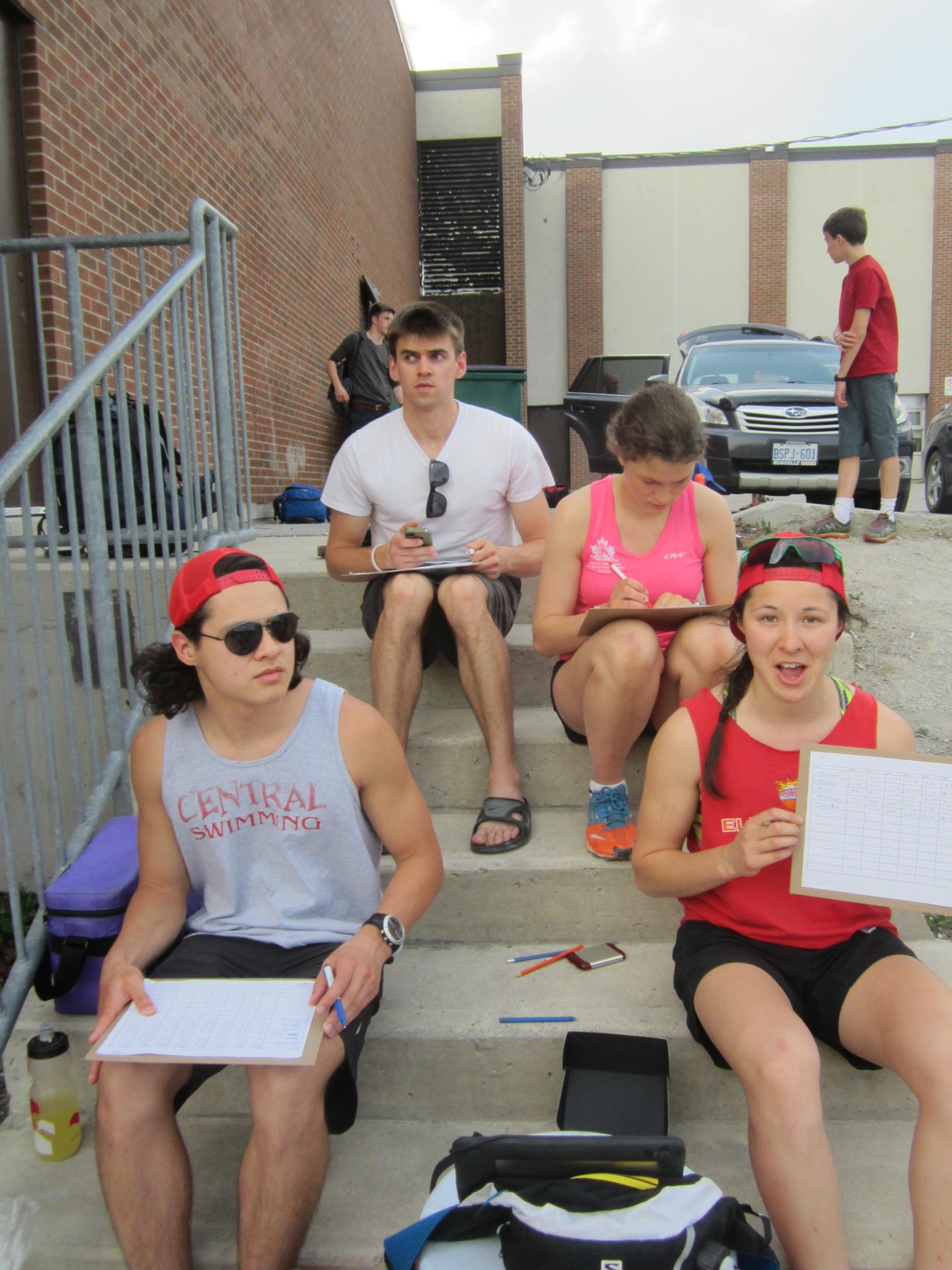 Ryan, Jordan, Bella, and I on timing duty for the running tests 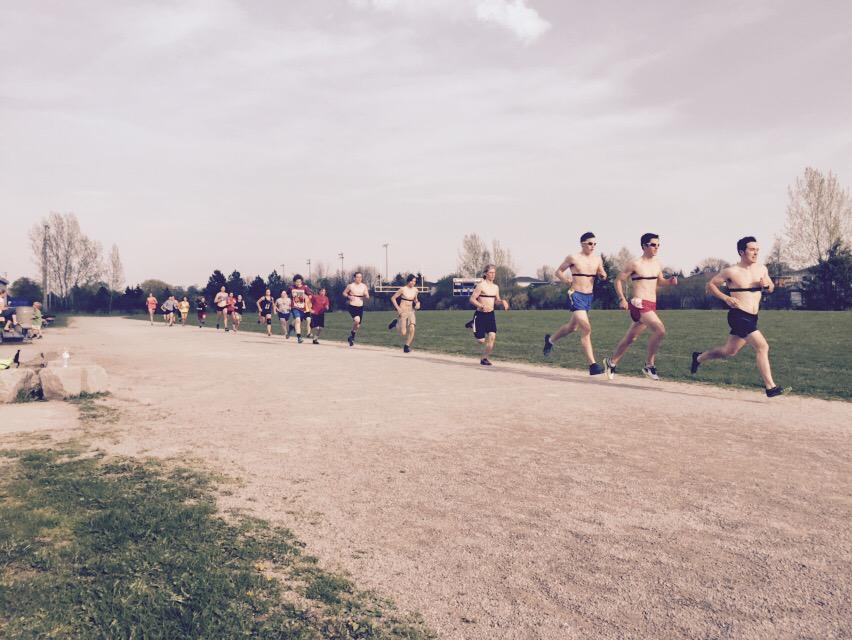 On Sunday, Mothers Day, Ryan and I went with my Mom to do a 10k road race in Toronto. This was my fourth year running the Sporting Life 10k, so I’m starting to collect a nice data sample. Despite the less than optimal running conditions (25C and v humid), I had a great run – clocking in at 38:18, with almost even splits at 19:06 and 19:12 for a 50s personal best on the course! Ryan also had a good run, matching his personal best from last year, and Mom is still killing the age-grading game too : )

After the running race, we had a short visit with family and then I was on a plane and off to Canmore, AB, for a 9 day training camp in conjunction with the National Team and Academy. The focus of this camp has been to get quality on snow training, have an altitude block, not fry myself and train 4000 hours, and to get motivated for the upcoming training season. The skiing up at Sunshine Village (near Banff) has been fantastic, the training quality high, and motivation ramping up. Bob, Scott, and Evan are also here from Thunder Bay for the camp.

The schedule so far has been skiing on Monday and Tuesday with strength Tuesday afternoon, then a dryland day of roller skiing and running on Wednesday, Thursday we went back up for a long ski, Friday was strength in the morning then a roller ski intensity workout in the afternoon, and Saturday is a day off.

Up at Sunshine we are skiing on a groomed loop at about 2300m, so a good ways up. I didn’t realize we were so high until after the first two skis and was surprised when I found out because I didn’t “notice” the altitude affecting my training as I often do (being a sea-level citizen). But as my wise brother once said: “altitude is all in your head”.

In addition to the groomed loop, the crust skiing has also been excellent. You can ski almost anywhere, although you have to pick a smart route and be wary of triggering an avalanche. Also worth looking out for are cougars, but from what I’ve been told: by the time you see the cougar it’s probably too late. I saw some paw prints while out on the crust on Tuesday, then promptly went back to the open meadow in hopes of reducing the risk of becoming cat food.

I’m no animal-tracking expert, but these were not deer prints.

This week I’m staying with family-friends, Andrew and Carrie, who moved to Canmore from Midhurst (my hometown) when I was in elementary school. They have been very generous in letting me stay with them, share meals (EXCELLENT PIZZA), borrow a bike for commuting, and giving me rides if I need them. It’s also nice to stay in a home, rather than a hotel because: a) not going bankrupt paying for a hotel b) much more comfortable to be living in a house c) great company and lots of cats.

Andrew and Carrie’s friend, Shannon, stopped in Friday night while passing through Canmore. She also brought her two dogs and puppy – whom she is training to be a service dog. The cats became more reclusive with the new visitors pawing about. The dogs were amazing though. (fun fact: we also discussed at length how it’s hard to take pictures of black dogs)

A pair of well behaved doggies and a learning puppy

On my bike commute over to the Nordic Centre for strength Tuesday, I came across a now not-so rogue coach – Pav! Pav is coaching with the AWCA this year. We did the rest of the commute together and took a selfie (my selfie game is improving), it was good to catch up.

The Academy is also having their kick-off camp this week and invited the TBay’ers to join them for a BBQ/campfire on Wednesday evening. Their team has a lot of new faces, a new era for the AWCA, I think. I know everyone on their team by name, but it was nice to be able to chat and actually get to know them a bit better. 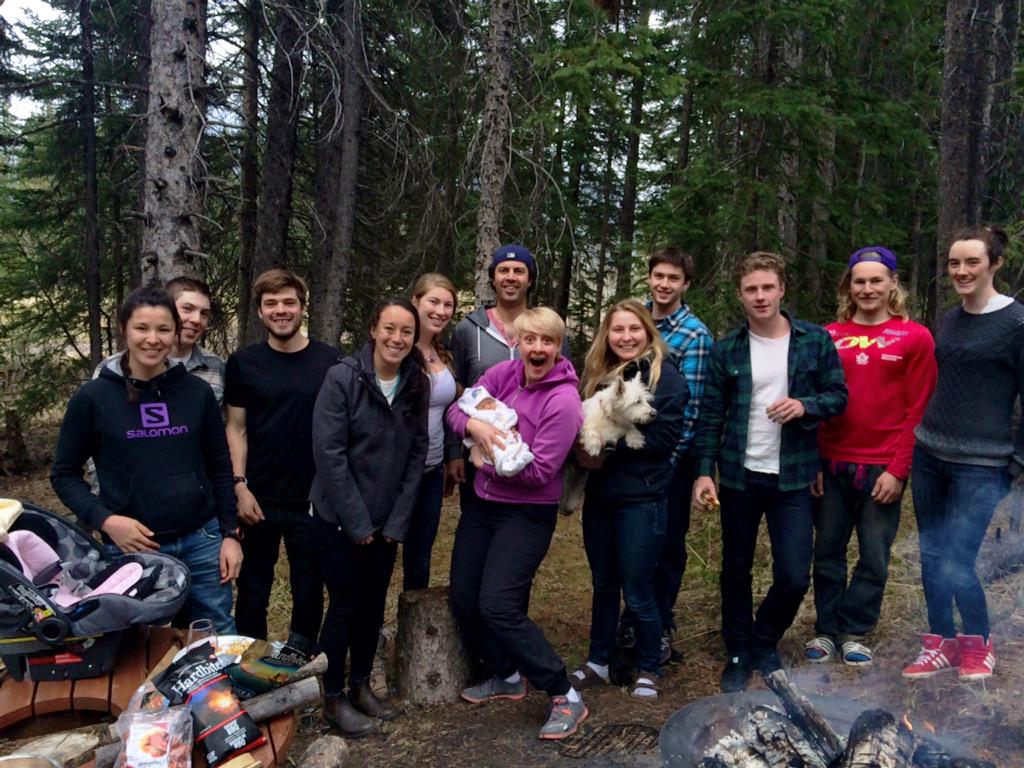 This afternoon I did a classic roller ski intensity workout with Emily Nishikawa. The specs were: 5x5min uphill double pole/kick double pole with 3-4min rest. Emily is probably the best classic skier and female distance athlete in the country, so I was psyched to be able to jump in this workout with her. I only accidentally clipped her pole once, but otherwise I think we both benefitted from having a training partner for the session (and I benefitted from the draft into the headwind) !

And that is the gist of what I’ve been up to so far. Apologies for the rather disjunct post; there were a lot of things I wanted to include in this post but was (and still am) worried it would become to drawn out… Anyway, I still have a few more days of training here in Canmore before I head back to Thunder Bay. We are doing our own testing camp starting next weekend. I’ll try to update sometime mid-next week, but if not expect a post about Boot Camp in the next couple weeks.