After writing my last post yesterday morning I had a few hours to work through some school, get pumped about Olsson winning the 15k, and video chat Andy who has been racing in Europe for the past couple weeks. He, along with several National Development Team and top NorAm skiers have been competing in Scandinavian Cup races in Latvia and Estonia. Some of them are coming back to Canada this weekend, while others are going to stay in Europe to compete at the Lahti World Cups on the first weekend of March.

When I returned to my room to after breakfast I found a poster on the door. I think Katja or our Ontario mission staff leader. Marlene, put it there.

Our Paranordic athletes have been having a very successful week and they have a nice collection of posters growing on their door too: 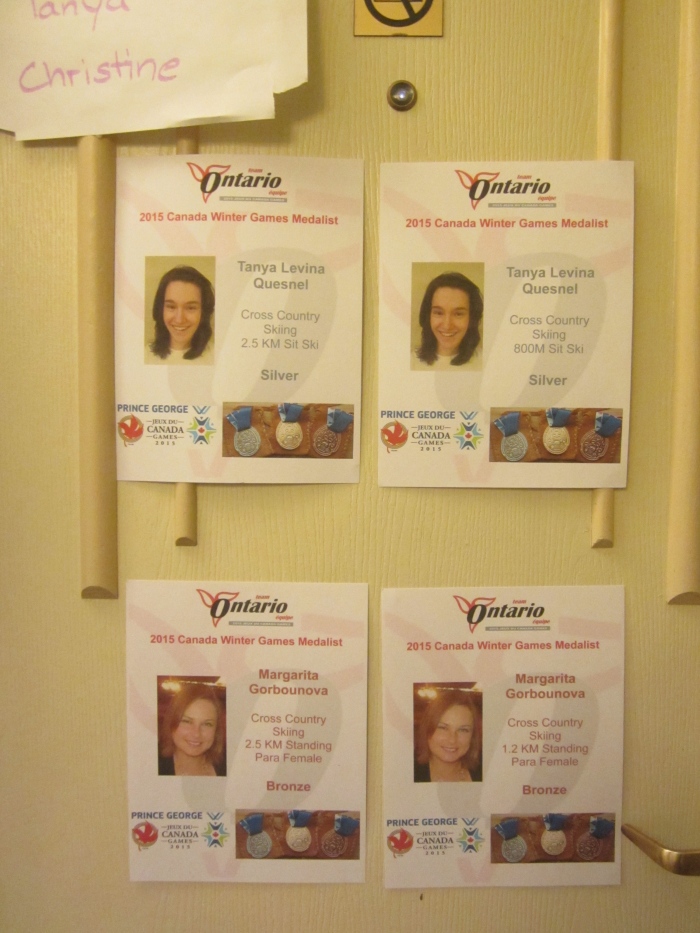 Para athletes Tanya and Margarita pulling in those medals!

The course was open for training at 1:00 today so our coaches asked us to take either the 12:30 or 1:00 bus up (it’s about a 20min shuttle). I decided to take the later shuttle so I could take a midday nap, since I didn’t sleep well the night before.

Turns out everyone – like everyone, like all the other skiers competing this week, took the 12:30 shuttle (it must’ve been packed) because I was the only person on the bus, other than the driver. It was a little weird.

When I got to the race site everyone else was already out skiing. I had scraped my skis the day prior, so I just grabbed them and went out for an easy 1hr ski to get my skate legs back. I also tested a few pairs of skis but needed opinions from Jack Carlyle and Vic before I made my final decision. 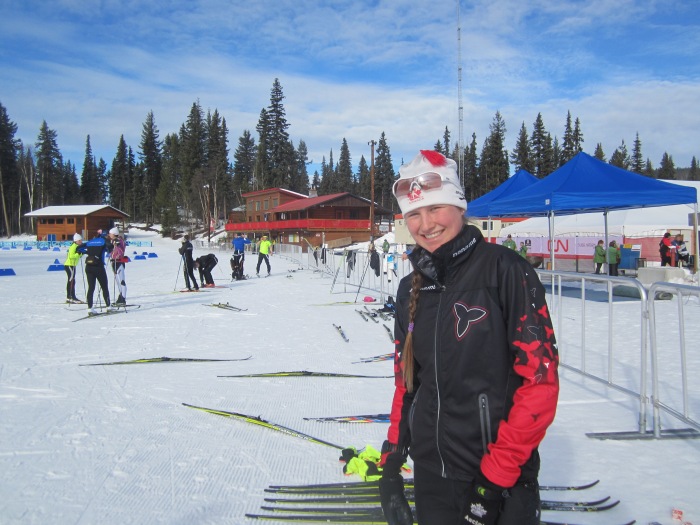 Heidi taking a break from testing

After the ski we packed things up and shuttled back down to the hotel for an easy afternoon. As the week has progressed, the number and size of puddles has increased dramatically. They have been spreading gravel stones around the wax rooms so when it freezes overnight it doesn’t get too sketchy (it’s still sketchy).

From the stadium the course climbs steadily for 1.3k (I GPS’d it yesterday) up to the high point. I struggled going up the second time, not in a “I went to hard on the first lap and now I’m hurting” kind of struggle, but more of a “I can’t offset and I don’t know why” kind of struggle. I probably lost 60-80m on the other chasers. Once I got over the top and into the up-down-up-down section I felt much better, carrying momentum and one-skating most of the hills. I pulled back a couple positions to finish in 6th. I’m pretty sure most of the time I lost on the second lap was on that first hill, which is too bad.

The final result was Anne-Marie, Katherine, then Maya, Annah and Kenda. Second through fifth were all very close, 2-3-4 were separated by 0.3s. Results here. It was an interesting week of racing, as Katherine was the only multi-medalist on the women’s side.

On to the men’s race-

Ontario boys at the front near the start of the race (check out Scotty’s cool boots and skis!)

Our boys had another solid day, keeping the silver medal streak alive, and all finishing in the top15. This time Evan was our top skier, finishing 2nd to Raphael Couturier who is a member of the National Ski Team, and ahead of David Palmer who was third.

Evan on the podium! with Raph and Dave

Team Ontario girls Heidi, Bella, Alannah, Sadie, and me – plus Jack and Vic

There are also non-sport competitions going on here at the Games. Namely the pin trading game. Athletes from each province are provided with a small collection of pins that you can trade with other provinces. It’s a bit of an icebreaker, and some people really get wheeling and dealing, trying to “catch ’em all”. There are some cool sets, Dave’s done some good trading and has collected some cool pins.

Tonight at our team meeting we will make final decisions on who will race the relays and on which legs. Tomorrow is a training day so what I test will depend on whether I get a classic or a skate leg. At this point I’m indifferent; our team has a solid shot at a medal and I’ll race whatever leg will give us the best shot at that. It’s a team race though, so everyone’s position is equally important. This will also be my first proper relay ever. I’m pretty excited.