Apologies if this post lacks any (or all) of my usual energy, creativity, or enthusiasm (I think I usually have some of those things)…

As I write this, I am onboard the Team Ontario charter flight from Toronto to Prince George. It’s 2:11am (EST) right now. We were supposed to arrive in Prince George at around 8:00pm yesterday. Unfortunately the plane was delayed by several hours bringing the week one athletes back because the planes navigation system wouldn’t reboot, or something to that effect. It’s too bad they weren’t leaving earlier in the morning; they could’ve just flown towards the rising sun… 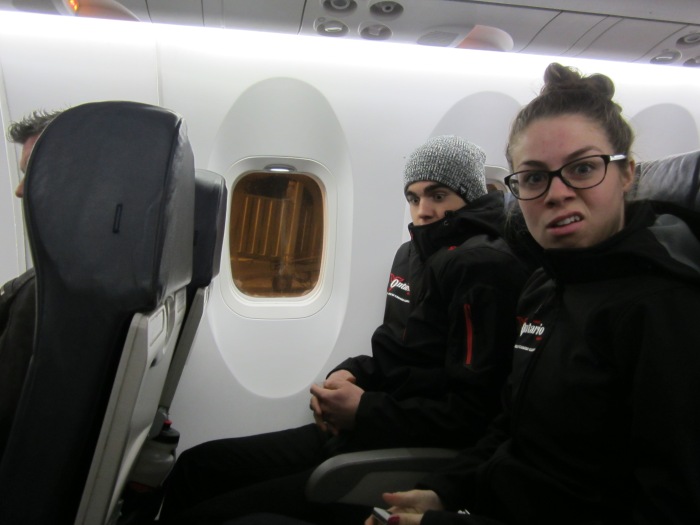 Evan and Alannah on our flight to Toronto

The Thunder Bay crew flew down to Pearson International early Saturday morning; we had pickups starting at 5:15 for the airport and actually arrived in the big city 10 minutes early! Since we were anticipated to have a long layover, I arranged to visit with my Aunt Judy, grandparents. My visit also happened to coincide with my cousin Mackenzie and her parents passing through to take Mackenzie back to school after her reading week.

It was a nice visit; we ran some errands and ate dim sum. We didn’t have time to go to a restaurant and do sit-down so we ordered it to go from the Happy Dim Sum Bakery. It was super good. Dim sum is basically Chinese brunch. It’s one of my favourite food-genres and Chinese cultural undertakings. Even though it was called a “Bakery”, they did regular dim sum, baked goods, and mass-produce certain specialty dim sum dishes which they export to other restaurants.

The Chinese New Year (Lunar New Year) was on the Thursday the 19th. My grandparents gave me some lucky money for the New Year and my birthday, it’s always really nice of them to do this.

While out running our errands we went to a health store that had lots of interesting supplements and natural-organic stuff. It never ceases to boggle my mind how readily available performance enhancing supplements and drugs are to the public. There were some steroid type supplements that were locked up in one aisle. I assume that because on their specific contents, which I didn’t look at.

I also found a blood pressure machine, which I used twice; it was averaged out to be 105/54 at a heart rate of 52bpm. Based on all tests I’ve done is recent memory, this is pretty normal for me, but is considered quite low for the average person. It’s nice to be “better” than average sometimes. Although low blood pressure does mean I often get head rushes when I sit or stand up too quickly.

It was snowing in Toronto all morning, so I shoveled my grandparents driveway for some light exercise and so they wouldn’t have to do it. After that, my Aunt took me over to the charter terminal where I spent some quality time waiting with the rest of the cross country team and our week two teammates.

We were scheduled to leave at 5:30, but with the big delay, it wasn’t until just after midnight that we left for Prince George. Earlier today I was excited about taking a charter, but after this experience I’m not sure I like it so much anymore. The flight itself was good though. 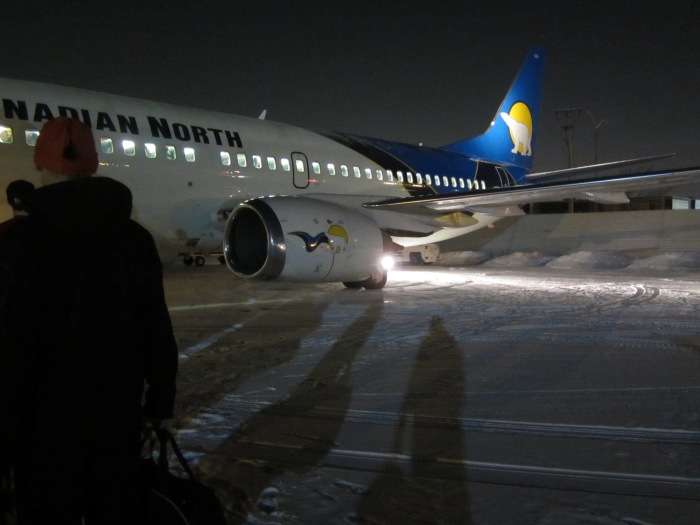 Walking across the tarmac to our charter plane

Ontario is currently in second place in the Games so far, behind Quebec. We have a bit of a deficit to make up this week if we want to win the overall, hopefully us cross country skiers can pick up some hardware and that this travel does not have a negative impact on our performance. Trip head coach Rick made sure we were all staying chill about the situation and not getting too stressed (although he and the waxers are probably stressed about the setback in testing time and that our wax boxes may not have made the flight…).

Anyway, posting this now from the library in the athletes village on Sunday afternoon – update on our ski today to come shortly!