I was a little nervous about coming back to racing. February 1st was my 7 week-iversary of breaking my leg. That’s only a month and a half. I only started walking properly 3 weeks ago, at which time I also started skiing. At first my skiing was restricted to double poling, which around Lappe is not the easiest thing to do (very uppy-downy terrain). I quickly graduated to being able to herringbone-walk up some bigger hills as my stability improved, and then to skating about a week later (so two weeks before Eastern’s). 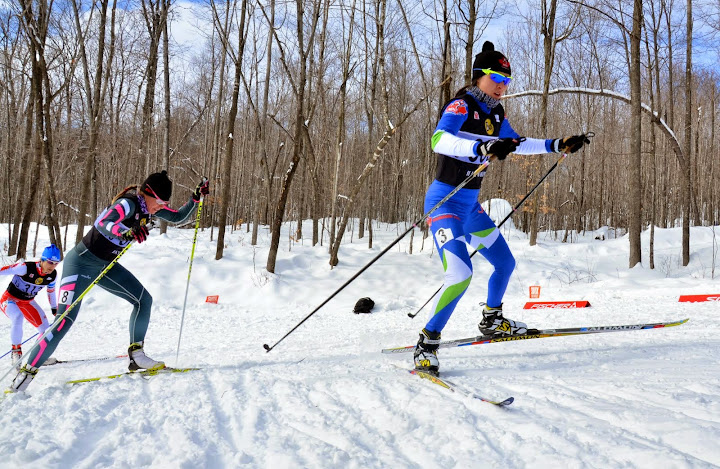 It’s kind of crazy to think about how quickly I’ve been able to bounce back. I was almost completely off any lower-body training for over a month yet I was still able to come back and race out at Nakkertok in a similar capacity to what I was doing at my best last season. My dad was telling me that you really don’t lose strength that quickly, that the order of training loss is anaerobic-aerobic-strength, so most of the weakness I’m feeling in my body (legs especially) is actually just the neurological pathways being slow because they haven’t been used in a long time…

Anyway, onto the weekend! 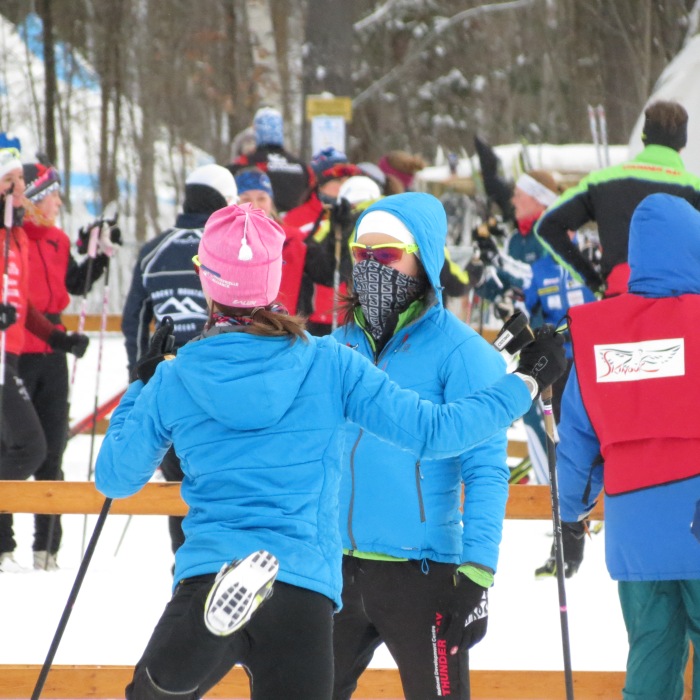 Trying to go stealth mode for the sprint qualifier

Friday was a skate sprint. It snowed overnight so the track was very soft for qualification, making it a long race (over 4.5min, for a “sprint”). 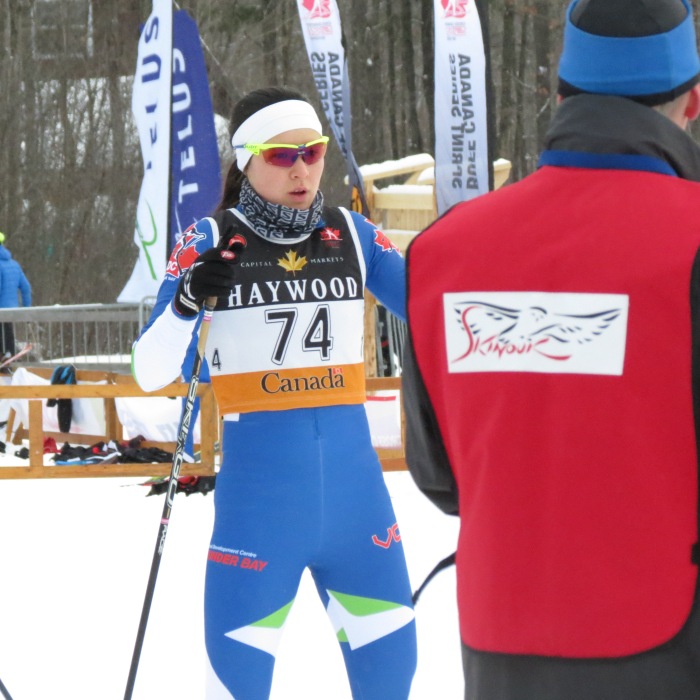 Lining up for my qualifier

This was my first real test to see where I was at, and I genuinely surprised myself by qualifying third overall! The time spreads in the women’s qualification were huge Heidi Widmer blew it open, 8s ahead of Andrea Dupont, and I was another 5s back from there. The time gap was a bit daunting, but considering this was my first time back racing I think it’s realistic to say I’ll be able to pull back some of those seconds by Nationals as I continue to recover. 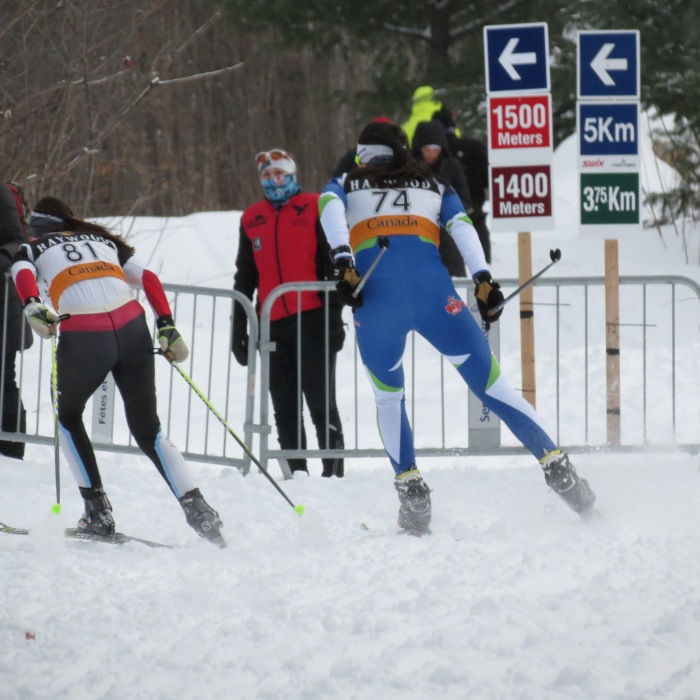 Heading up the Jackrabbit hill for the second time, following Brittany Webster on her first lap

I also qualified 3rd at Easterns last year, albeit not so far back. That was one of my best qualifications last season. Last year I finished 6th in the A-final (racing Senior, as I did this weekend). Funnily enough, I was 6th again last year, namely because of a major faceplant coming down the gradual run out before the final climb. One of the other girls just caught my ski (left, fortunately) and I bit it. My hat and glasses fell off and my nose was bleeding a bit. It took me a few seconds to figure out what had happened, and to make sure I hadn’t re-hurt myself. Once I confirmed I was a-okay(ish) I got up and skied it in to the finish. 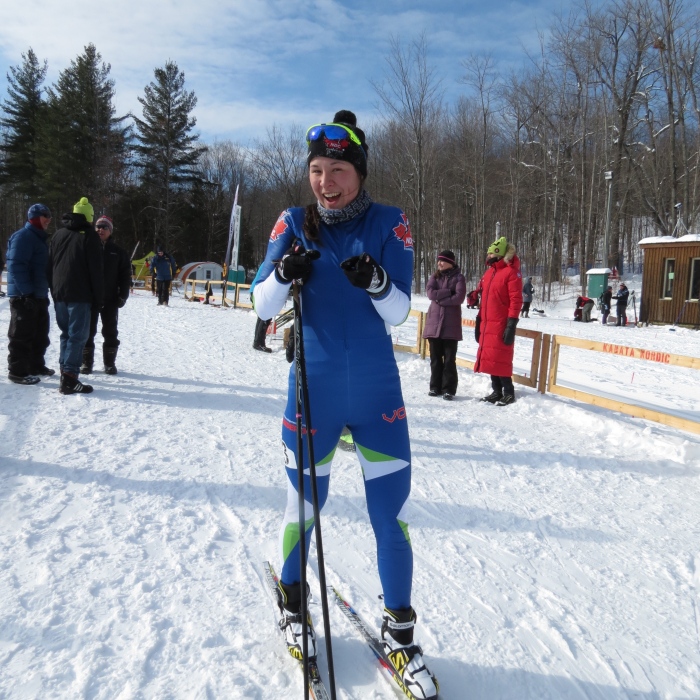 Not the finish I had hoped for, but not a bad start to my comeback either

Alannah was also in the final and managed to notch her first NorAm podium in 3rd. Sadie was also third in the Junior Women’s category, she had a nice drag to the finish to edge out the fourth place finisher. The boys also had a solid day. Andy got his first podium of the year, just getting outsprinted by Mike Somppi (also a Thunder Bay skier, now training in Canmore). 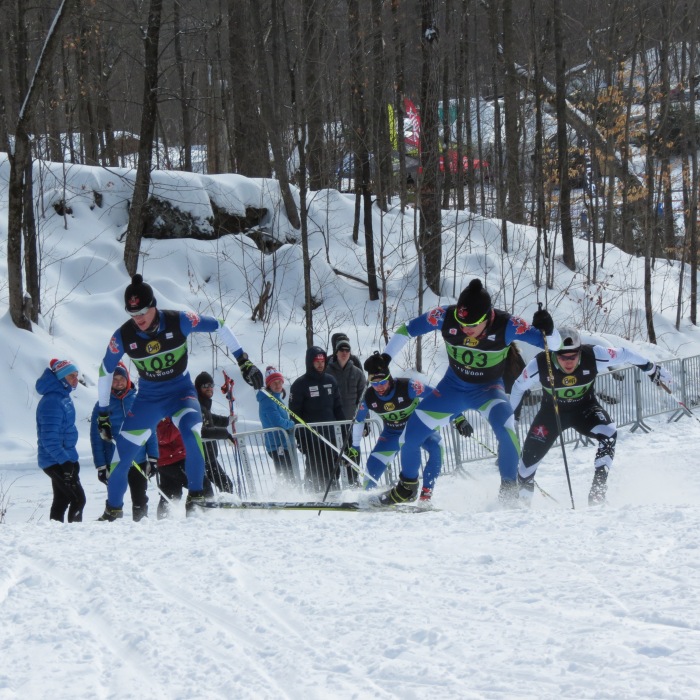 (L-R) Bob, Evan, and Andy in the semi-finals

Bob and Evan didn’t make the A-final, so they (along with Ben) took care of business in the B, taking the top 3 spots there. 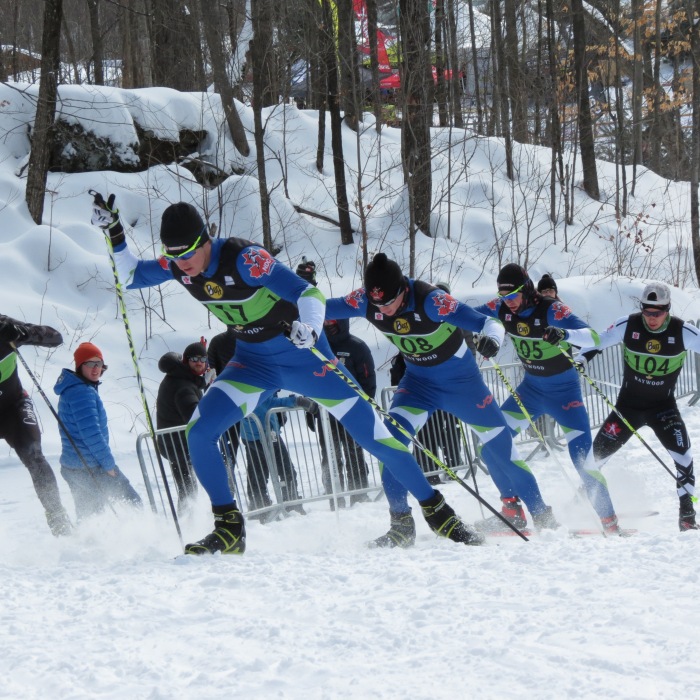 For the junior men, Dave and Sam had a mixed day. Dave ended up in the B-final, which he won, and Sam just missed making it out of his quarter and ended up finishing 14th. 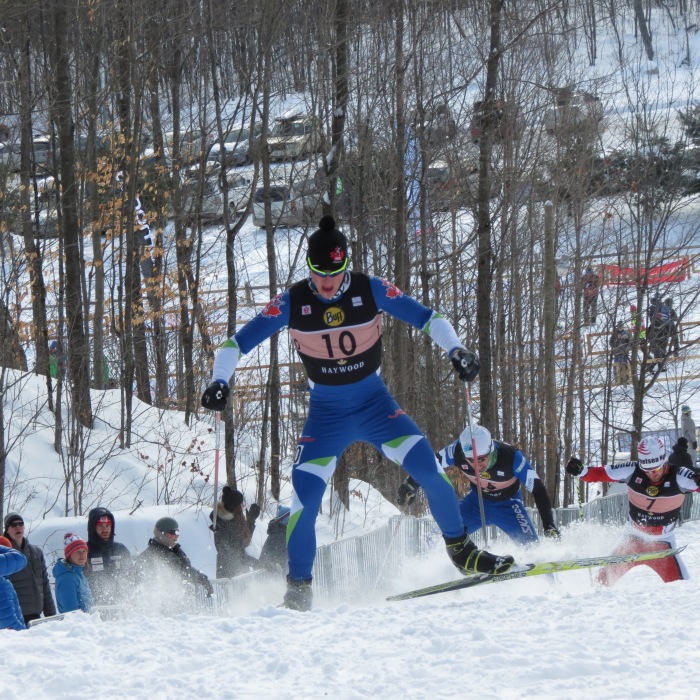 Dave leading the B final 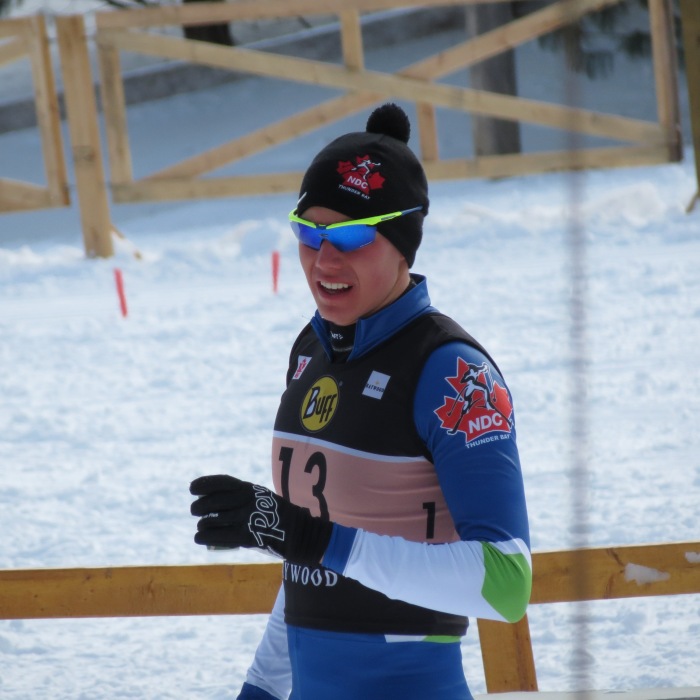 The middle-distance skate races on Saturday had to be delayed slightly because it was forecasted to be quite cold overnight. My race didn’t start until noon, so I went for a short jog in the morning to wake myself up. We weren’t sure how the course conditions would be after how soft it was Friday, so Vic had two pairs of skis (one for soft and one for hard conditions) ready for each of us. Vic did a super job this weekend, he was working really hard alongside the Highlands crew to give us all excellent skis. 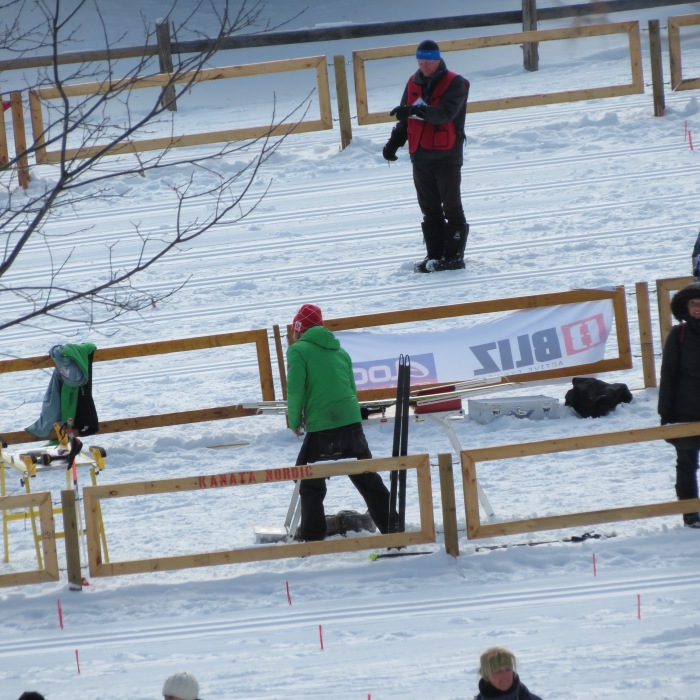 Vic working in the stadium on sprint day

I don’t have much snap or spring in my legs these days, and I don’t feel like I have much top-end capacity. I really noticed this yesterday as lost a lot of pace and what little spunk I had as the heats progressed. Knowing this, my plan for the 10k was to be smooth and mentally relaxed on the first lap, and to not freak out about getting tired so I could dig in and push on the second lap. 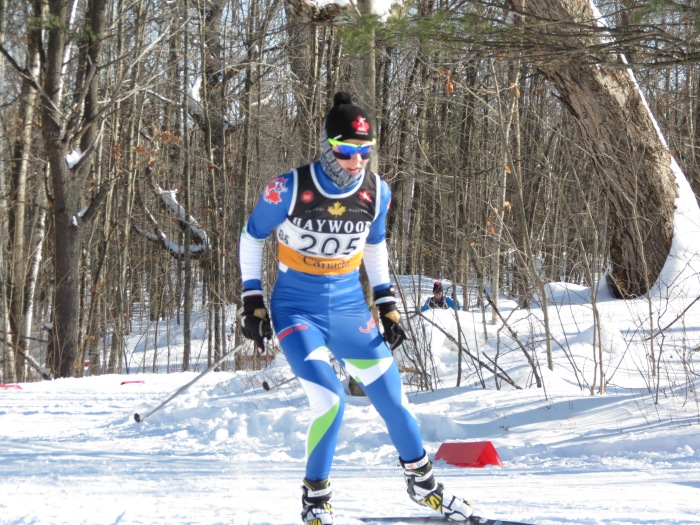 All bundled up for the race. I ended up being overdressed…

Alannah had a flying start to the race, making up the 15s gap in less than 2k. When she caught up to me, I made a mental resolve to not let her get away if she passed me. We ended up skiing together for the rest of the first lap, but I was able to pull away in the latter half thanks to my more gentle start to the race. 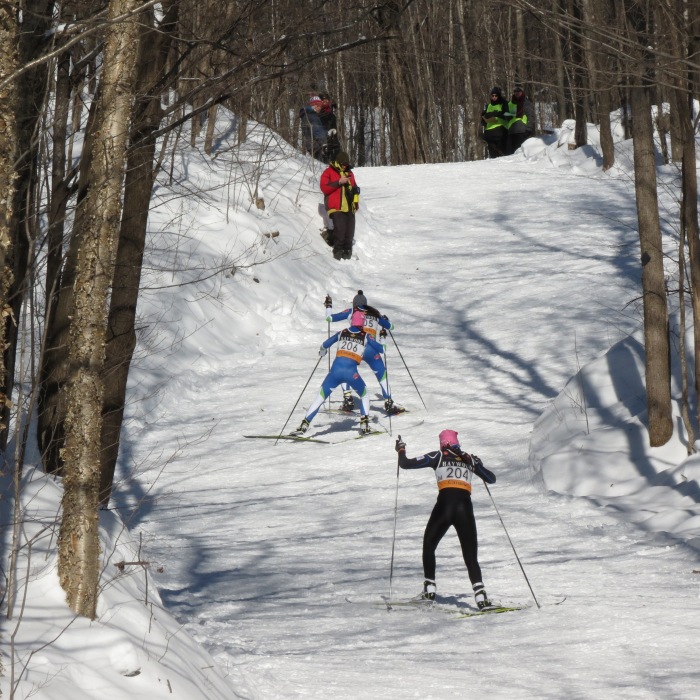 Me leading Alannah late in the first lap

The only person who caught and passed me was Heidi. She ended up second on the day, just 4s behind Emily Nishikawa who won. I was over 3minutes back. Again, a long time… Normally being so far back would stress me out, but I’m still rebuilding and am far from being in top form, whereas Heidi and Emily are starting to gear up to race in Europe on B-tour or possibly at World Senior Champs. I hope they qualify for World Champs, it’s always more exciting to watch when people I have competed against are in the races. 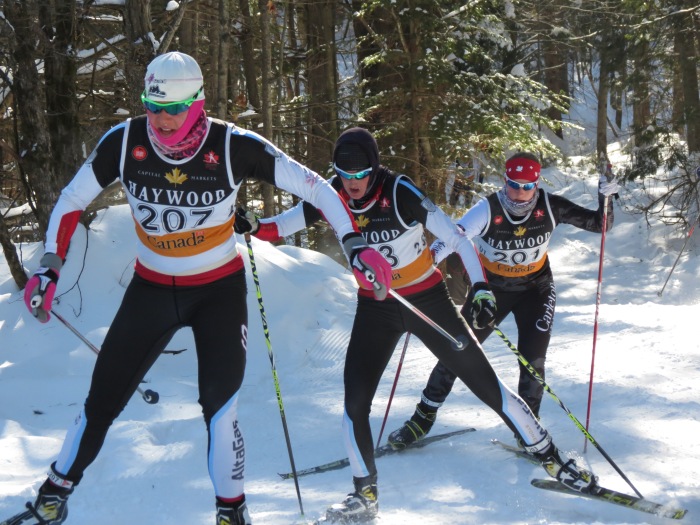 Kendra was the top U23 skier today, about 30s ahead of me (I think). She’s racing really well right now, so that gap was encouraging for me.

I didn’t race in the classic mass start on Sunday. Classic skiing (kicking the ski hard, specifically) causes a sharp twinging sensation where I had the plate put in. I suspect it has something to do the with tendons. My physio hasn’t given me any specific recommendations yet, but this is definitely on top of the “things about my body I want to fix” list. Instead of racing I did some double pole intensity up the hill on the warmup track. It’s pretty steep in places, but it was manageable. I was taking about 1.5min bottom to top.

My bro had a sick race on Sunday though! He did a 10k classic mass start aka his jam. I didn’t get to see much of the race, but my mom said it was super exciting – they were skiing as a big pack and slowly people were getting dropped off, one by one, then Ryan came into the finish straight with a skier from Telemark who he beat out in the final sprint. I literally sprinted across the race site to see him win his first Junior Eastern’s title! (only afterwards did I realize that I ran across some potentially hazardous terrain, which could’ve ended badly) It’s awesome that we’re both back racing in (almost) full capacity now.

My mom took all the pictures, minus the one from Emilie, in this post. I haven’t seen the ones from Sunday yet, but I will try to add them once I do. It was great to have so many people out taking photos, racing, and supporting the event at Nakkertok. I got a lot of support and encouraging words from people over the weekend, which was so nice to hear and made me even more excited to be back on the racing scene.

Thanks for reading – next up: lots of school, some skiing, then Canada Winter Games. Other than adding new photos, don’t expect any blog posts until mid/late February!

2 thoughts on “Easterns – The Return”