A few things happened to me on Sunday, the most notable was probably breaking my leg (that’s what this post is mostly about, but please bear with me as I get my thoughts out). Less notable things were the women’s race being postponed by 30minutes, doing a running rather than skiing warmup, not having needing a touch-up after testing my skis, the student-nurse missing the vein when he tried to put in my IV needle, being assigned a room on the pediatric floor, the surgeon breaking two drill bitts trying to put the screws in my fibula, to name a few…

Explanations for those little things are easy to come up with, but it’s harder for big things – things that seem to happen out of the blue, without rhyme or reason. Hence why I’m not sure what “reason” my leg is broken for yet, but I’m trying to stay positive about it.

The biathlon trailhead at Black Jack – the stadium is ~150m in

Before I go back and rehash what happened, I just want everyone to know that I am feeling okay, that the surgery went well, and that I am expected to make a full recovery without complications. I genuinely appreciate all the comments, messages, texts, tweets, emails, and phone calls I’ve received wishing me a speedy recovery – so thank you again.

First of all, it’s not even a good story. There were no heroics, no nail-biting racing, I wasn’t even moving fast… I’d just grabbed my race skis and was on my way to the start line, (feeling quite relieved that the course had been changed from 2x5k to 3×3.75k, so we didn’t have to go down the sketchy hill) when I slipped on a patch of ice under the loose snow and went down abruptly. Since I had my skis and poles in hand, I instinctively tried not to land on them and went for the full-body fall instead.

I must’ve landed on my lower leg at a weird side-ways angle because as I hit the ground I heard a loud pop/crack sound from near my right ankle. My immediate reaction was that the tendons in my ankle had just jumped around (they do that sometimes), but as I went to step up I couldn’t feel my foot properly I knew it was more than that. Alannah had been walking behind me and immediately went to get help once we established I was not okay enough to get up.

Where our team was waxing, photo from training day. My fall happened to the right of the frame.

My mind was racing in circles after that. I was in pain, but honestly, the mental anguish I went through in those first few minutes was worse. All I could think about was how I wasn’t going to be able to redeem myself for one of the worst (mindset-wise) races of my life I’d had the day before, that I wasn’t going to be able to prequalify for World Juniors, that I probably wasn’t going to qualify for World Juniors at all, that my entire season was possibly over, that I’d just ruined what was likely to be the most important and successful season of my career thus far (which, to me – at 19, is a big deal and is very overwhelming to think about).

That might all sound very narrow-minded of me, but what else was I supposed to think about? My whole life basically revolves around skiing (especially since I finished my exams last week – which all went well, by the way). I know skiing is a “late-development” sport, and what happens in your junior years is not a be-all-end-all. But I’m still pretty upset about my situation right now. It’s hard to think about how all the work I’ve done to get ready for this season was essentially written off over one little slip up (pun intended). I’ve made some new goals – the #1 being to recover as well and as quickly as possible and to try and make a comeback for the end of the season.

Waiting for my x-ray at the hospital. Not really sure what to do…

Andy and Vic came with me directly from the race site and stayed until I was admitted to my room, Timo came after the races and stayed to keep me company until I had to go for the actual surgery. I’m glad they were able to be there with me for support (and to make fun of my “dress”, and of the prospect of me having to do water running as rehab), being in the hospital by myself would have been too depressing.

This was my first surgery and it was an uneventful 30 minute operation. I was put fully under, and when I woke up after the surgery I was able to talk with the doctor briefly. I had spoken with my parents via phone prior to the operation and my mom thought it would be a good idea to get a bone density test. When I asked the doctor about it he got a good laugh and said that wouldn’t be necessary because he’d broken two drill bitts trying to put the screws into my leg (I have 5 screws and a plate in my right fibula now). I couldn’t help but to join in laughing because of the irony.

Monday morning I was taken down for another x-ray to make sure thing were setting well. Things must’ve looked good because I was cleared to leave the hospital, provided I passed my crutch test. I passed, and have since learned that crutching is hard. I was also given a prescription for more medication, a physio referral, and some basic guidelines for my recovery.

Timo and Andy picked my up at around 11:30 on Monday and we drove back to our condos near Rossland to meet up with the rest of the team. After saying “hi” to everyone, we piled in the vehicles and drove to Vernon (Alannah and Andy packed up all my belongings while I was in the hospital, and Alannah even did my laundry – double thanks!). The team is staying in Vernon for a few days before moving up to Silver Star for the races at Sovereign Lake next weekend. I spent one night in Vernon with the team and flew out of Kelowna Tuesday morning to come home to the SOD for the holidays.

Keeping my leg elevated during the drive back to Vernon

We did our team Secret Santa gift exchange Monday night (the one where you steal a present or open one from the pile) so I could be part of it. There were lots of food-based gifts this year, but also a few other interesting ones (like a mini-Christmas tree). All the gifts were well done and it was a lot of fun. I got some Brookside chocolates and a Christmas Charlie Brown mini-book. 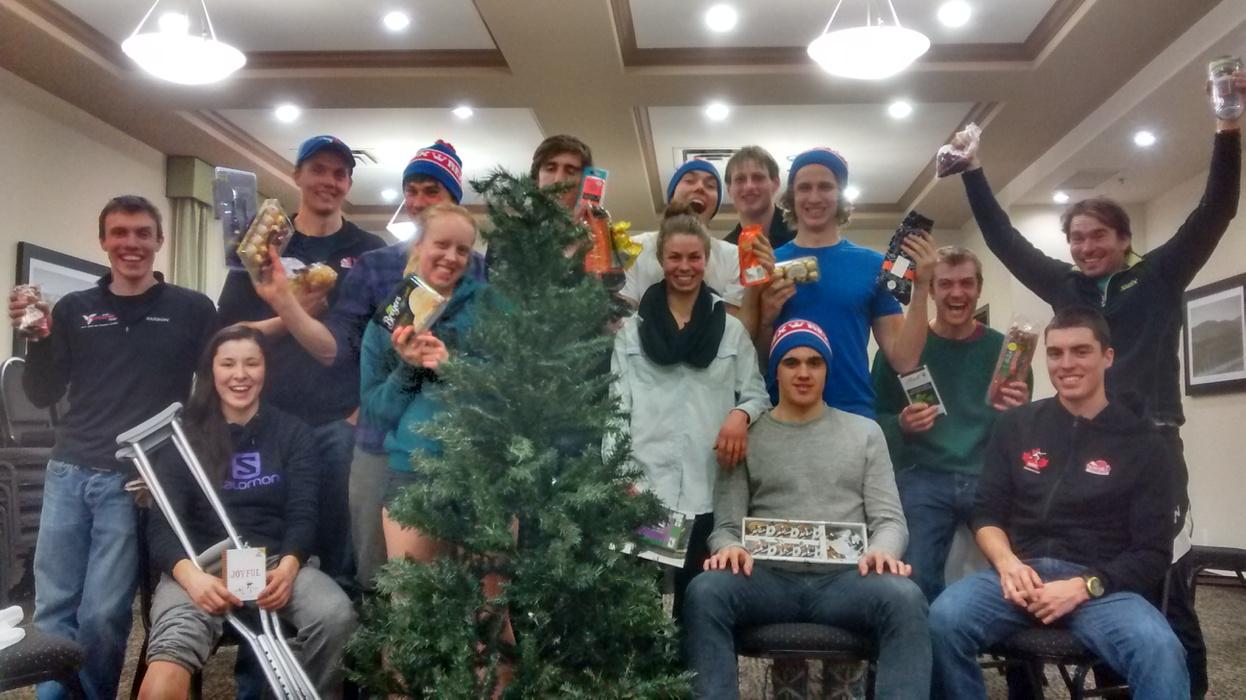 Well, I wrote this post on my flight from Vancouver to Toronto. My Dad finishes work a couple hours after I arrive, so we’ll drive home together. I’ll need help getting around the airport, as I haven’t come up with a feasible way to carry my duffle and ski bag while crutching. My appetite is also back today. I didn’t want to eat much while I was in the hospital, or after I was discharged yesterday. It’s still rather meager since I’m not exercising though.

Once my leg no longer causes me pain, I will find some appropriate activities to keep myself busy. My recovery timeline is 5-6 days of feet-up rest (I’ll try, really) and keeping the incisions dry, to see at doctor after 10 days to have the stiches removed, and that I’ll be able to do weight bearing exercise in 3 weeks. One of my first proactive ideas after breaking my fibula was to try and find a sit-ski I can use over the holidays. I’m pretty determined to maintain as much fitness as reasonably possible while my leg recovers. I know resting is important (and I’ll probably be more rested than I’ve ever been in my life after this) but it’s also important that I don’t go crazy in the meantime.

For the avid nordic-fans out there, you’ll know that USA National Ski Team athlete Noah Hoffman also recently broke his fibula in a crash at the Kuusamo World Cup a few weeks ago. I sent him an email the other day so that we can chat about being a broken-leg skier. Joking, not joking. I hope he responds to me because I’d like to know more about what he’s doing to recover. His blog details his activities quite comprehensively already, but I’s rather actually talk than just lurk.

Anyways, this post is already 1600 words so I’m going to cut it off here. I will probably blog semi-regularly as things progress… I just want to emphasize that I am absolutely doing okay, and that all the support I’ve already received has been amazing for me and is really helping me stay positive.

4 thoughts on “My leg is broken”