I’ve just gotten through a slew of assignments, labs, and midterms, and was able to take some time to put together a video for the fall. It’s mostly Frozen Thunder footage, as well as some miscellaneous triathlon and parking lot shenanigans. The best part though, or at least the part that was the most fun to put together, was the BONUS TRAILER at the end of the video…

My video-editting skills are rather limited, and I mostly learn as I go, so overlaying and cropping sound clips to sound okay-ish was a bit tricky. I’ve just been using iMovie, but might try out FinalCut if I want to attempt something more involved. I previewed the app and there is a lot of stuff going on, so I would probably lose most of the basic efficiencies I’ve already developed with iMovie. Anyways, enough hmm-ing and hawww-ing, here’s the video!

“Coming soon” is a rather ambiguous term, and is intended to be that way. I’m not sure when The Hunt will premiere, I have a lot of rabbit-eating-veggies footage to sift through and try to make exciting. I assure you though, it was an afternoon (and evening) well spent rabbit hunting.

Last week we did a little video-shoot for our Nordic Fest video. Andy and Gavin are working to put it together now and we will see it this weekend at the dinner. We had the green/blue screen out and were doing head shots in front of it and put a “cool background” behind us. We also did some more goofy and fun shots too.

this is a serious shot

a secret, behind the scenes look at our video-shoot…

We are also skiing here in Thunder Bay now. It snowed on Friday prior to our 3k Uphill test. The 7cm of power on the roads were not conducive to PB times, but there were still some solid results. Cross country spikes seemed to be the way to go as we were running in the semi-packed car tracks.

It has, and looks to continue to stay quite cool for the foreseeable future. Temperatures down to -16 C have been seen, but it’s usually somewhere between -5 and -10. There isn’t much of any snow in town yet, but the sub-zero temperatures make bike-commuting rather tedious. I still have my road bike out, so I have to be extra careful of ice on the roads. If we get any snow I will definitely switch to the mountain bike.

We have been skiing skiing out at Lappe a couple times now. There isn’t enough snow to groom, so they have shovelled and pulled a single track around part of the lit loop for now. You can ski off of it but the trails are quite bumpy in places without adequate coverage – it is still rock-skiing condition. I’m excited to be on snow, albeit on a 2k loop. 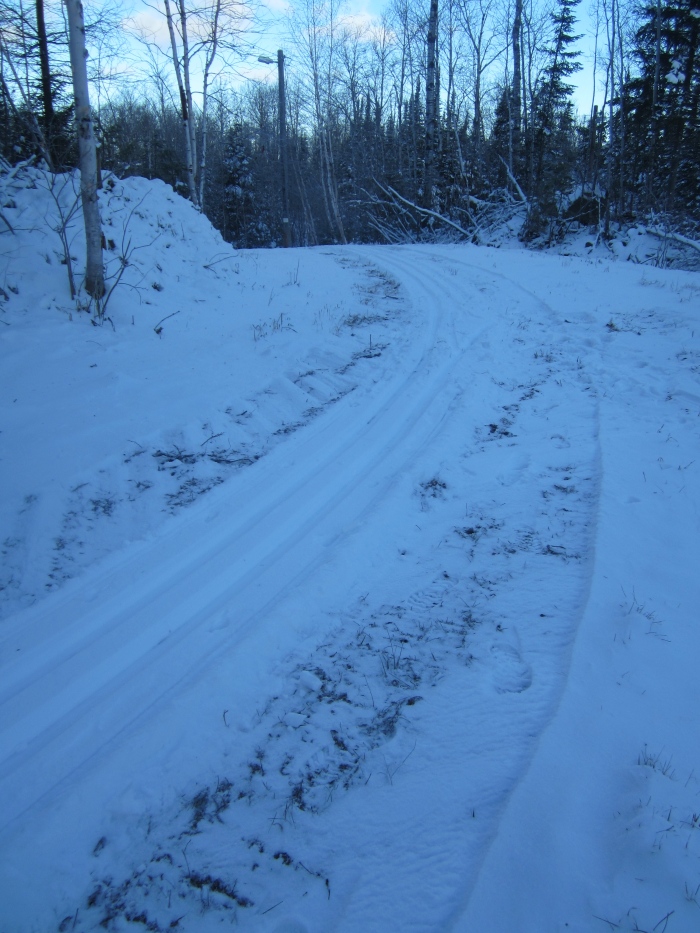 A shovelled corner on the track, Sunday morning.