I spent two more weeks in Canmore after my last update, which brought the total camp length up to 18 days, by far the longest of the season. Over the course of the camp I skied 478km which, on a 2km loop, is a lot of laps. It wasn’t until the last few days that I started to get genuinely bored of skiing. That was probably more the result of the back-to-back 4-4.5hr skis we did those days. Even so, I was able to refocus myself by picking a technique cue or drill and focussing exclusively on it for two laps.

I have lots of pictures today, so I’ll run through the camp with those. But first I’d like to apologize to Jen Tomlinson for not updating my blog on Sunday or Monday like I said I would. Such is the nature of bloggers.

So the first official ski race of the year in North America was a classic sprint race. The format allowed everyone to compete in 3 heats, which are made directly from qualifying results. The heats are rearranged each round, with people moving up or down a heat depending on whether they won or lost. I had an okay showing, but most importantly was able to work on my racing tactics and skiing aggressively. The people in my heats circulated a bit, I raced mostly with Caitlin Gregg, Maya MacIssac-Jones, Olivia Bouffard-Nesbitt, Katherine Stewart-Jones, and Dan Kerr, all people I will compete against in the race season. 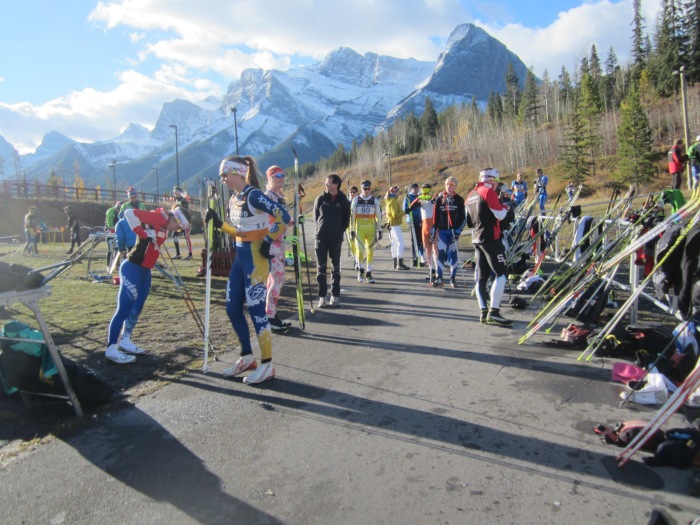 Athletes milling about near the start on sprint day

Here’s a picture of Dan, me, Ryan, and Joey on the morning of the sprint race in one of the public wax rooms while we were waiting to warm up. We were stoked to race. 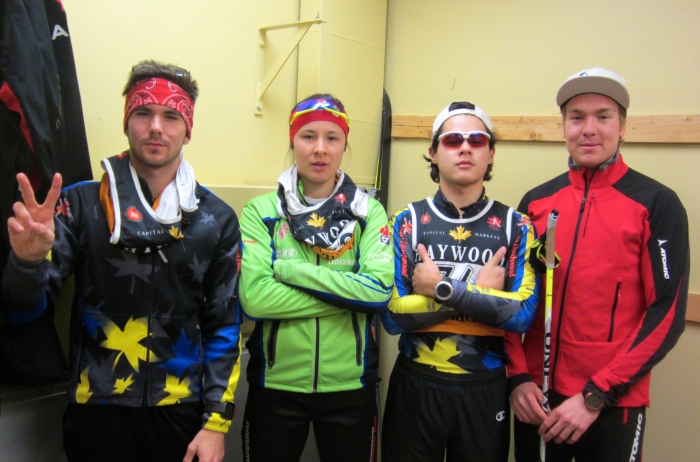 some of the Team Hardwood crew on sprint day

After the race I cooled down with fellow Junior’s Ember Large and Annah Hanthorn. Ben and Evan also made a nice photobomb.

I find when I’m doing hard intensity during a volume focussed block that I need to cool down for longer and do more pick-ups and accelerations to get my body feeling properly reset. I’m not sure if this is scientific at all, or just psychological.

On the weekend we had a couple cloudy days and rain. When the clouds roll in here the mountains disappear and it’s almost like they aren’t even there. They aren’t completely gone here, but sometimes the clouds would drop down far enough they’d be completely gone. 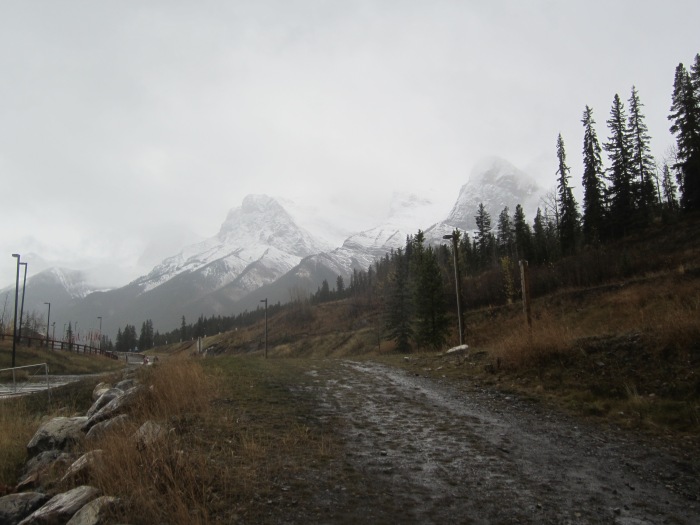 On Monday it was the distance skate race. The women did 4 laps and the men 6 (without the out-and-back section, the loop is about 1.8km). Compared to last year, I had a staggeringly good race. Straight from the results page it doesn’t look too impressive, I was 17th, but as a list of regular NorAm competitors I would’ve been 6th and 2nd junior. I was only 8s behind Dahria and Anne-Marie, who were arguably two of the best junior distance skiers last year. Of course, this was only a training race, but I’m still quite pleased with the “result” considering my training load coming into the race. I also paced myself quite well, which is something I struggled with last season. Results can be found here.

After the races it was back to the long zone 1 grind. My favourite. Seriously. These days offered good opportunities to test skis in conditions we don’t often see during the Canadian winter. Here is Andy bringing his skis back to the wax room after testing. 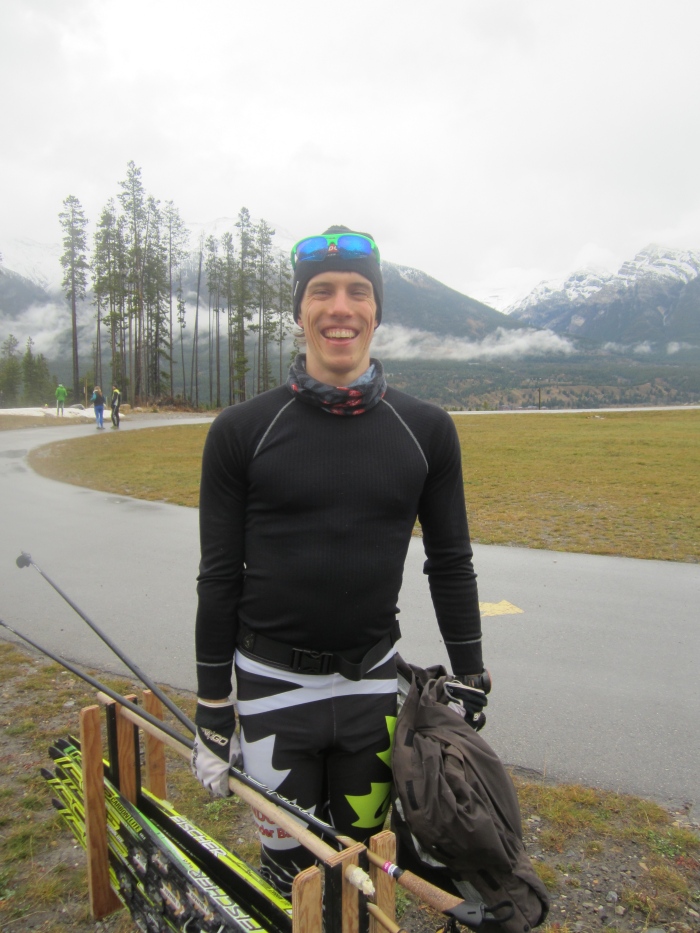 In addition to the US National team and training centres, there were lots of provincial team and club athletes training at Frozen Thunder. Here are Nakkertok coach Kieran Jones and Junior NST skier Emilie Stewart-Jones (Katherine’s twin sister). Emilie went to World Juniors as a first year junior girl, but got quite sick the following year and did not race at all. Last year she made a big comeback by making the JNST and will be competing again this year as a second year junior women. [end]backstory[/end] 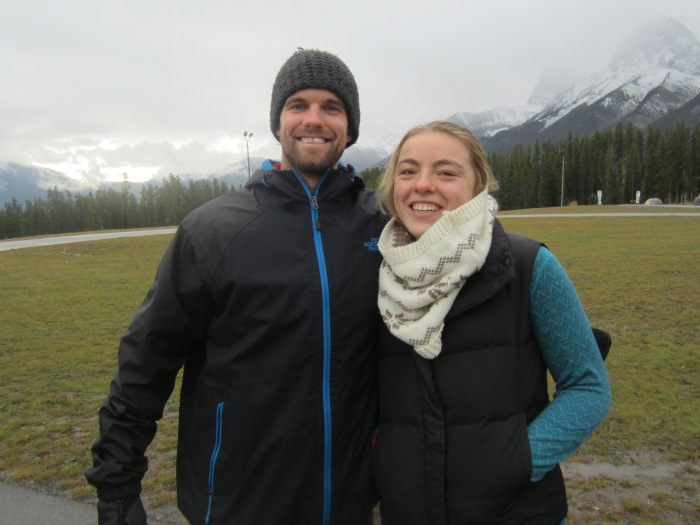 Evan, Ben, Scott, and I did a presentation with Dahria on “The Highs and Lows of a Junior Athlete”. I think it went okay, the backstories tended to drag on a bit, and the lows pretty low and long, but in the end I think we made the right impression. The takeaway from my part of the presentation was to “think about future you” – which means to separate what you need to be a good skier:

There will be a lot of similarities, but my point was mainly to recognize that if you want to be fast at Nationals, you might have to sacrifice being fast at the OCup 2 weeks earlier. The personal example I used for this came unintentionally – last season I was under recovered for the better part of the race season and didn’t have the results I wanted, but because of that I maintained a high base fitness and didn’t over-race myself, which I believe put me in a good position for the current season. Take the positives from the negatives, basically – and understand what a negative might have to offer as a future positive. (Boom). 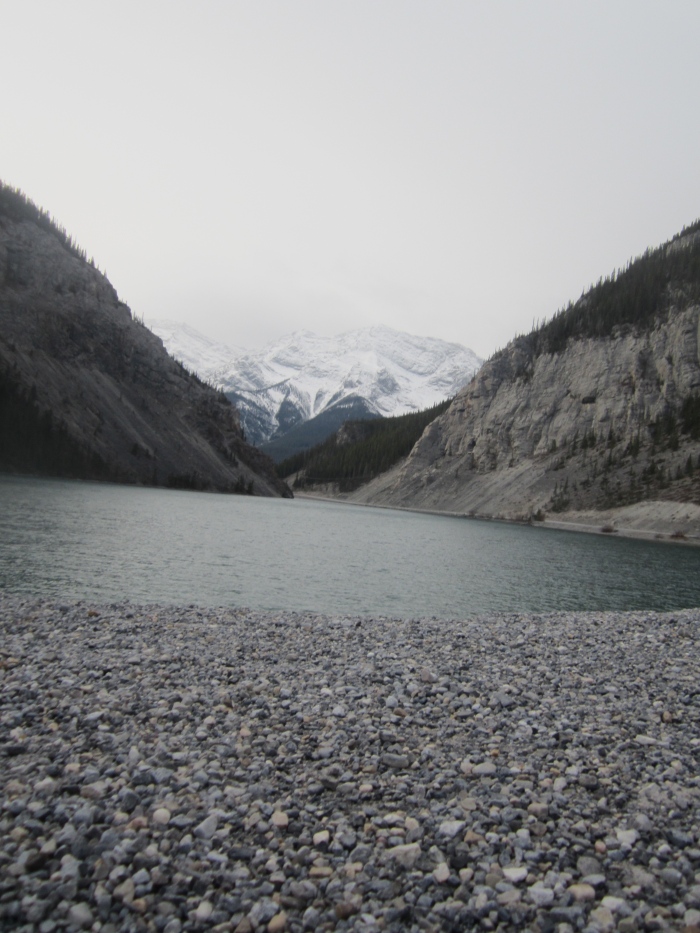 The last couple days of training were “ski-you-brains-out” days, but only for a maximum of 4hours – which is enough if you do it right. Most people would switch techniques partway through the workout to shake things up, but I took the road less travelled and uni-techniqued both days. On Saturday I classic’d for 4 hours and on Sunday skated for 4.5. It was a lot of skiing and my body is feeling happily aerobic right now. Here is the data file from my Suunto if you want to check it out. The map is really exciting. 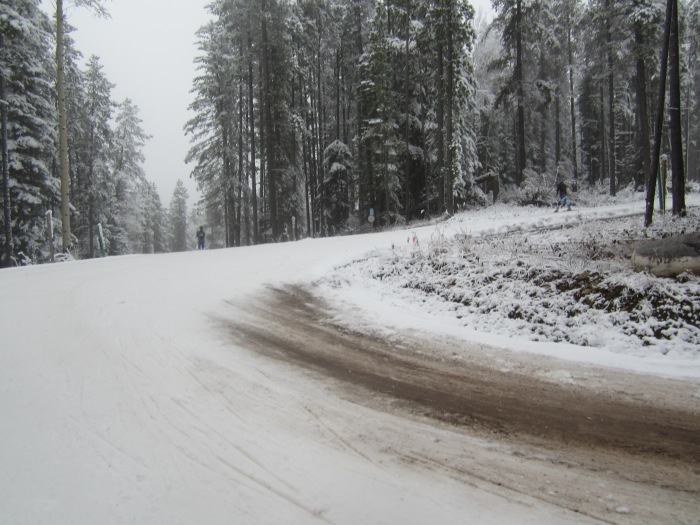 dirty patch on the last day (but also some fresh snow!)

And that was the gist of the camp. Lots of skiing, lots of fun. It’s back to the grind with school now. I’ve been turning out lab reports like it’s my day job so I figured I’d change it up and write something less formal (this blog post). Also, NordicFest is just around the corner (November 15th). For those who aren’t familiar, it’s a banquet dinner with silent and live auction items, and draw prizes. It’s a big fundraiser for our team, so if you’re in Thunder Bay make sure you come on out and join us!