Last time I left off Tuesday afternoon just as I was getting ready to go to an afternoon gym session. We were fortunate enough to have access to CXC’s weight room, which is about a 20minute drive from where we’re staying. It’s a bit of a quirky set up; located on a ground level floor of a hotel/lodge, the amount of space and equipment was decidedly limited. This forced us to make some improvisations to exercises, and adjustments of weighting because of missing plates, cable machines, and dumbbells. 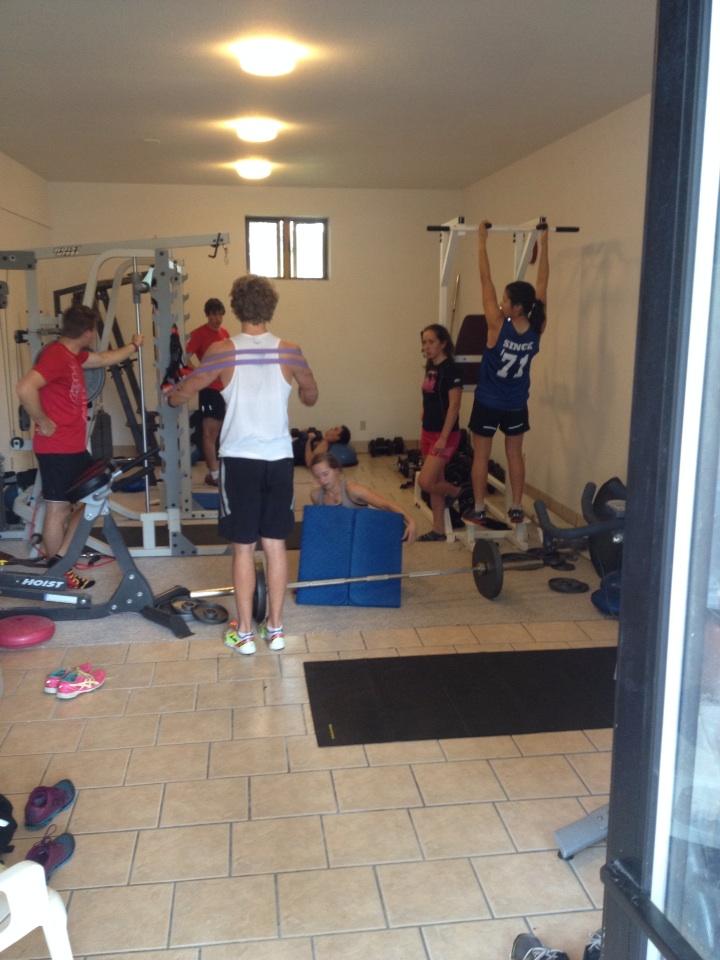 hitting it HARD in the gym… sort of (NDC photo)

After sweating it out in the gym – like really sweating it out (no AC, no fans, v muggy, v hot), we hopped back in the van and drove through a monsoon back to the Cresthill. I think I already mentioned how the weather here has been rather subpar, and I shouldn’t to dwell on it… but I must emphasize that I have only seen the sun twice since arriving here, the humidity is over 9000, and based on the amount of precipitation we’ve received, you’d think this training camp was taking place in the rain forest (except there aren’t fancy birds here).

Anyway, after surviving the monsoon drive, we had a hearty chile dinner and Andy, Ben, and I finished a game of Catan the group started a few days ago. It had started as a full 6 player game, but was abandoned early on for a team meeting. So, each playing as two players (Andy was himself and Julian, Ben was himself and Holly, and I was myself and Alannah) we adjusted some rules and played out the rest of the game. In the end, I took the big win (thanks to Alannah’s road building prowess, and my, my… uhhh, my… outstanding tactics and gameplay…).

Wednesday was a big OD (over distance) classic roller ski. The coaches mapped us out a big loop that started and finished at the house. You can check the map and data file out here. The workout ended up being a hair over 4 hours, and we logged 65km. Not too shabby.

A happy Holly at the top of a big hill

It was a pretty sweet workout, and I’m a big fan of OD days. They’re sort of my thing. But even though I felt good during the ski, I also felt a bit off. I don’t always sleep well during training camps, so I think that might be why my focus was slipping a bit. I haven’t done much napping so far this camp, and with a the trend of being late to bed (than usual, for me), and waking up early (usual for me), I think I’ll put in some more afternoon snooze hours.

Either way, the ski was still pretty awesome. It was my first good long ski on my new SkiGo classic roller skis. They’re carbon fibre and have a ski-like camber and flex to them. So not only do they dampen vibrations from the asphalt, but you can actually feel yourself kicking the ski down when you stride up hills. It’s easy to like a good thing.

Alannah celebrating the completion of our OD ski with her muscles

This long workout warranted an afternoon off.  Sam has had his slack line set up this week and I’ve been getting in some practice. I’m starting to get the hang of it and am consistently making it to the halfway mark or further the other day – still haven’t made it all the way across though. soon.

Thursday was a rest day and another rainy day. Initially, some of the guys (and Timo) had been planning a pitch-and-putt day for the team, but the weather kind of spoiled that one. Instead we made our way in to town to do laundry, buy groceries, and see a movie. Turns out no one was particularly laundromat savvy, so we required the aid of the regulars to get the machines going. While we were waiting for our clothes to wash, we went over to the Norse Nook for lunch. They serve Scandanavian food and AMAZING pies.

Just a few of their award winning pies

We saw “The Giver”, which was quite good. I read the book in elementary school so I recognized parts of it. The premise of it is quite interesting.

It was clear that evening so we had a team campfire. Julian and Bob played some guitar for us and we all roasted marshmallows and made smores. We also sang (badly, on my part) camp songs, and played some Never-Can-Tell games. It was pretty fun.

Friday morning was back to the CXC gym for another strength sesh. Julian and I did the workout together and made some serious GAINS from our same session last week. The afternoon was another OD ski, skate and 3 hours this time. I was feeling pretty lethargic at the start, but once I was 40-60min into the ski my energy picked up and I felt waaaaayy better.

I just got back from our morning session, which was a classic paceline intensity. Vic had people swapping skis to try and balance the group so everyone would stick together a bit better. Alex and I swapped skis, so she was on my SkiGo’s and I was on her V2’s (which are quite slow). Regardless, I had a good workout, feeling strong during my sprints and recovering well in between sets. We did a boys line and a girls line. Since there were only 4 girls our intervals were a little shorter; 2 minutes as opposed to the boys 3 minutes with 8 people.

some of the guys after the paceline sprints

Yep, that’s the latest. We have options for our afternoon workout – a run or a ride. Most of us will be going mountain biking. Tomorrow is another strength workout in the morning and ski walk in the afternoon. Hopefully it isn’t too buggy for the ski walk this time. I’m starting to compile videos for the camp and am going to do another  vlog. Holly has been taking some GoPro videos too and has given me the go-ahead to use some of them, which should be neat.