It seems like a lifetime ago that I last posted. It really hasn’t been that long though; just a few weeks. I think the change in scenery is what makes April seem like the distant past.

It’s hot here in the SOD. Yesterday was an absolute stunner: sunny, 24C, easy breeze… and I’m not even much of a summer person. Not having any real commitments, (other than catching up with local sponsors – which was super nice) it felt kind of like summer vacation when I was younger. Sticking with that impulse, I spent some quality time doing choice activities that seem to have gotten away from me lately: climbing trees and having rad jam sesh’es with my bro, watching my dad fix things and watching lots of sports (MotoGP, and the Giro right now), feeding tennis balls for my mum and playing board games, running and riding the county trails, reading in the sunroom, shooting hoops in the driveway in bare feet… all the good stuff.

It’s also been “off season” for skiers, time to take it easy and recoup. In the past, I’ve come home from Nationals and the snow is completely gone. However, this year I returned to Thunder Bay to find midwinter conditions (save the -40C temperatures). I’ve already written about the 24 Hour Relay, our Spring NDC Adventure Ski, and captured the drama of the Kamview Parking Lot on film, and even heading into May, winter would just not die. On April 25th Thunder Bay got a nice 15-20cm dump – in town! Crazy.

Dude trying to clear the intersection (snowplows were MIA)

Figuring this was as good an opportunity as any, Andy, Gavin, and I suited up and went for a little adventure ski of our own. Skiing from home, we made our way along the snowy sidewalks to some park-space and wound our way through the ghosty trees. 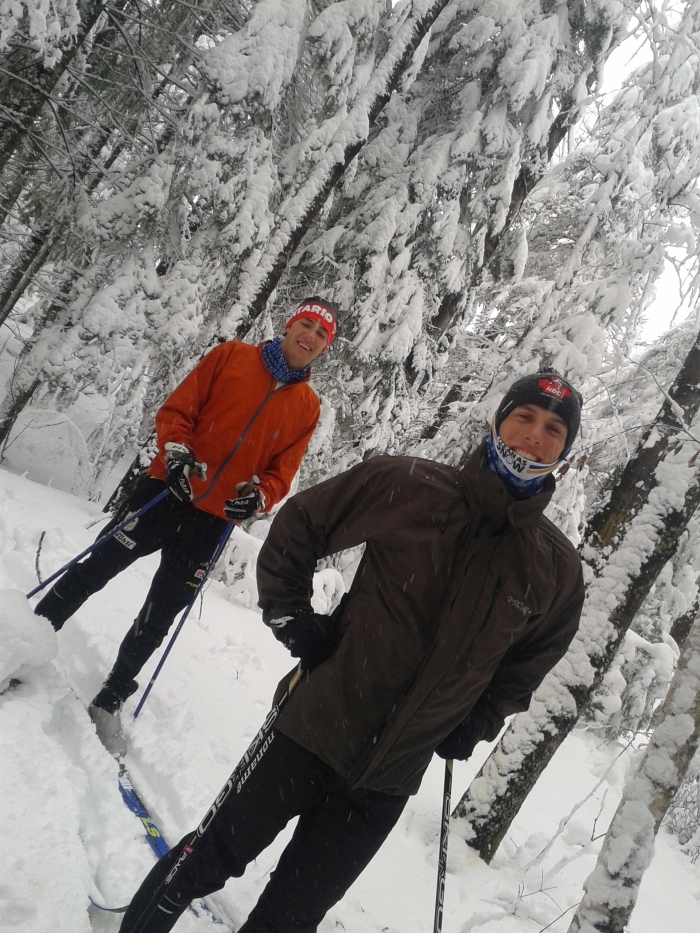 And so the snow came in and I went out. Time to go home-home and visit my folks.

It’s been a pretty lax time since I’ve been home in the SOD. One of the main items on my agenda was the Mother’s Day 10k road race that I’ve done with my mum for the past couple years. Ryan also joined us this year and, in his first ever road 10k, threw down a 36:35 with a 17:45 5k for the negative split (quote: “so gnarly”)! I also scored a PB – on my 5k split. Ryan was also quite pleased that, of the 27 000 some odd people, he was the first to cross the line wearing a snapback.

Since winter didn’t leave until mid-April, I’m just getting restarted on training now. Working my way back into a strength program, doing some structured training, long runs, roller skiing, intensity… roller ski intensity? Not exactly how I envisioned easing myself getting back on the blades but yah, that’s the plan.

I’m pretty zonked right now. I’ve been putting a lot of hours in – into my spring class, that is. It’s pretty intense, very concentrated. I reckon I’ve been ploughing through almost 60 pages of textbook a day just to stay on schedule. Anyways, onto pictures for the rest here since my brain is too fried to do much more than—

all star skiers, not interior decorators

Dad digging a big hole in the backyard (disclaimer: not for bodies)

Retro Coke can found while digging the hole #artifact

And my schoolwork never ends either. I’ve been diligently taking breaks from my work in order to do important things like eat, sleep, go outside, blog, vlog, dog, hog, frog… – wait! did I say vlog!? Yep, sure did. I actually don’t formally know anything about video stuff, but I’ve been working on a video recap of the past month or so. It’s been kind of fun, mismatched clips from here and there, working them into something that doesn’t make you want to claw your eyes out… I jest. It’s not that bad. It’s not done yet either though. I’ll probably put it out in a week or so, depending on how things go – so keep an eye out for it!

Next up: back to Thunder Bay for Boot Camp with the team – some of the same crew, some fresh faces. After that we have a few weeks in town before we go to Amurica for a camp in Bend with the NST and CNEPH. Should be fun.