You may remember, back in November, I wrote a post about a team “adventure ski”. If you missed it I recommend checking it out here: NDC Adventure Ski, and if you’ve already read it, feel free to go back to relive all the hilarity, and wallow in nostalgia – actually I think that’s reserved for me, the nostalgia that is…

Anyway, yesterday evening I was greeted with an email and a proposed route for a morning crust ski. The plan was to start from Lappe early in the morning so we could make the most of the firmer conditions before the sun rises and things warm/soften up. Of course, adventure skis never go according to plan. Here is the proposed route and our actual final route.

The initial plan was to ski along the river that runs into town. But, alas, when we got to the river it had already experienced some significant melting and was nigh impossible to travel on, unless you had a boat – which we didn’t. And so we made our first improvisation, crossing the river and continuing down the snowmobile trail in search of a pipeline we’d run along a few times back in the fall.

The river crossing was nothing short of spectacular. Well, on the parts of Scott and Victor H. that is. While the rest of us struggled through braking waist-deep crust in an effort to avoid the river and stay dry, Scott and Vic made a heroic charge towards the creek, jumping, then flopping flat onto the opposing bank. I keep replaying their crossings in my head because it was absolutely priceless. Sadly, no one captured it on film, but they definitely won the “YOLO” award for the day.

From there we continued on our way until we arrived at a gravel pit/quarry thing. The snow had melted on the high banks of the gravel mounds in such a way that they made for some nice drop ins. The guys “hucked some sick jumps” and managed to break 2 poles and 1 ski in the process (note: only 7k (40min) into our 30k (4hour) adventure).

After this fun break it was all business as we got pushed onward, skiing along the high snow banks bordering the roads, in what we thought would take us homeward-bound. We earned several puzzled looks from passing vehicles, and also managed to break another pole and bust a binding along the way. This brought our casualties (for a group of 10) to 3 poles, 1 ski, and 1 binding. While skiing down one particularly sketchy hill I had a nice bail. I lost my balance and inadvertently put my ski down on the roadside gravel, rather than the much preferred snow bank, jolted to a halt, spun 180, and jarred my right arm pretty good (don’t worry, I’m okay).

After skiing along the road for several kilometres we found the pipeline and it was mostly smooth sailing from there. Here’s our crew (Jenn & d’boys) just before we got onto the pipeline. From L-R: Vic W. + broken pole, Jack + broken ski, Ben + stylish pose, Vic H. + broken pole, Nick + broken pole + busted binding, Scott + drink belt and snacks. Second pic L-R: Bob, Timo, and Andy trying to figure out where the heck we are/where we’re going.

From here on out it was smooth sailing, save for a few “no trespassing” sections with security cameras, barking dogs, and road crossings, we managed to find our way back to town and onto the river we had originally planned to follow. It was kind of sketchy, skiing along it through town, because it wasn’t exactly completely frozen… We all navigated it okay though. I’m just going to toss up some more pictures with quick captions since I know you’re just looking at them and not actually reading this anyways.

early stages. leaving at Lappe at around 7am.

One of many road crossings

A little portage between skiable sections

Note: my definition of “skiable” was changed dramatically today. 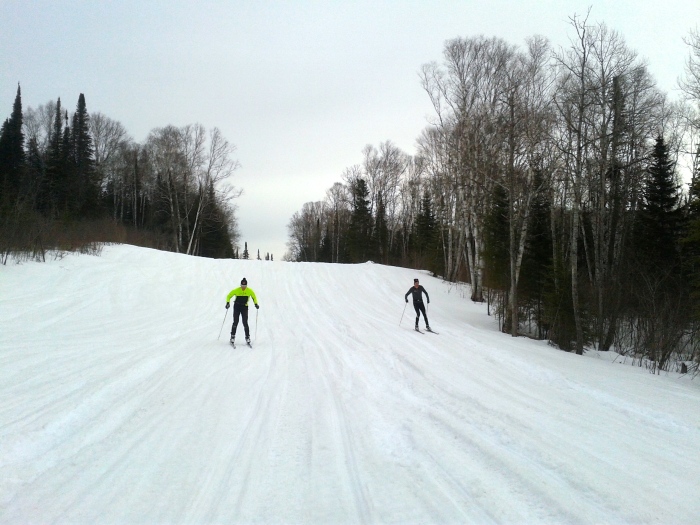 Onto the FREEWAY (pipeline)! Full speed ahead!

Here’s a video of another road crossing… feat: Vic putting some nice structure into his skis and Jack’s broken ski – yikes.

And that was the end of the skiing. Scott, Bob, and I got onto the river before the other crew (they were more skeptical about it’s safety) so we made it back a little ways ahead of them. Bob and I walked a couple kilometres through town on a walking path, clad in full ski gear which drew a few more puzzled looks from the passing pedestrians.

nice mid-morning stroll to finish of the adventure ski

And that’s that. Another successful Adventure Ski in the bank. These are the kinds of outings where unless you’ve done one before, you don’t know what you’re missing out on. Basically:

The 6am pickup – worth it.
Struggling through waist deep crust covered snow – worth it.
Bailing HARD – worth it.
Spending 4 hours hacking around when I probably should’ve been studying for finals- worth it.
Busting equipment – worth it (I imagine).

Hopefully we’ll be able to get out for some more NDC Adventure Skis/Runs this coming season, these experiences are priceless. The training centre application deadline has already passed, so hopefully you all applied to NDC Thunder Bay, if not I guess you’ll have to wait another year before you can potentially join us on these epic outings ; )

See you when I see you,