I really like having a winter birthday. I also really like being born on February 20th; it’s also, allegedly, Ben’s favourite day of the year.  As a kid I was never really the type to have a party where the entire grade shows up. I seem to recall having smaller birthday gatherings and doing “different” things. In grade 1 I think we went cross country skiing (it was a miserable day, blustery and cold). In grade 2 we went snow shoeing, had a campfire and roasted marshmallows. Beyond that I don’t really remember what birthday things I did, I guess they weren’t super memorable. One that does stick out though was two years ago when I got to race on my birthday, that was pretty fun and special.

Unfortunately, this year my birthday came one day too early to be on a race day. The Ontario University Championships went this past weekend (Feb 21-23) in North Bay, hosted by the Nipissing Lakers. It was a fun weekend of racing, comprised of a 6.6k individual classic on Friday, a skate team sprint, and a 10k skate pursuit. There was a bit of a twist on the event though: each race was being held at a different venue, and so it was dubbed the “Tour de Nipissing”.

Our first day of racing didn’t get started until mid afternoon, so we were left to mill about our hotel rooms for the better part of the morning, not daring to go outside and face the freezing rain, heavy snow, and gale-like winds that had set upon North Bay.

Not looking too nice outside

Some of the team made good use of their time and actually doing some reading during “Reading Week”. I can’t fairly put myself in that group; although I did get through a chapter for my online class, I spent most of the down time catching up on Olympic and ski-related news.

When it was finally time to go, all the girls met up in lobby with matching jackets and other gear to keep us warm and dry in the rather unpleasant conditions outside. I’ve been constantly pestered about being the only person on the team without a team puffy jacket. My response has been, and remains, that I don’t want a green puffy jacket. Thank you. Yes, they are very nice and look sharp, but I just don’t need one.

Ready to go out and crush some skulls

Day 1 went very well for our team. On the men’s side we went for the sweep + fourth and eigth, with Harry, Victor, Greg, Leif and Sean, in that order. The girls also swept, with Erin taking the top spot, followed by me and Alannah. Our other four female skiers, Daphne, Amie, Moira, and Bryana also all finished in the top10. This put Lakehead into a strong position for the overall title.

The classic race went okay for me. On the second lap my lower back seized up pretty bad and I slowed down quite a bit. Considering that, I’m quite happy that I was still only 15s back from Erin and right in the mix with Alannah. It was a pretty crazy day for waxing, with the temperatures hovering around zero and mixed precipitation falling throughout the day. Our coaches/support team of Adam, Amanda, and Steve did a superb job with the skis. We ended up going on klister and they really hit the mark. Racing on klister is the best, someone else puts in on for you, you get roller ski grip, and oftentimes they’ll even clean it off for you.

Day 2 took us down to the waterfront of North Bay (although we couldn’t see much of it) for skate sprint relays. It was a flat course to end all flat courses, looping around a parkspace with the only elevation change coming from crossing a ditch of some sort. Flat is good with me.

What wasn’t so good with me (or anyone else for that matter) was the extreme wind. It was so windy that, on parts of the course, the snow would blow through the v-boards and create shin deep snowdrifts. When you ski into them you had to really sit back and make sure you didn’t face plant because they would slow you down so abruptly.

Fellow LU rookie, NDC skier, and Team Hardwood alumni Erin and I teamed up for the team sprint. Despite the adverse conditions, it was a lot of fun to do the team sprint. Relay style races are a nice change of pace from the usual individual racing. Other than OUAs, we only get to race team sprints at Nationals – although, I think Lappe may host a fun team sprint event sometime between now and then…

Our strategy for the race was to get out and front, get a gap, and ski hard. The course was only 800m and flatter than a Finn pancake, so there wasn’t much risk of blowing up and dying.

Here are my friends Shelby and Alex, they race for Nipissing and Carleton respectively. It was really nice to see some of my longtime ski friends out racing. Now that almost everyone is off at school and not all racing quite so much, we don’t cross paths as often. I did, however, get out for a couple games of bowling with Shelby and her team when I first arrived in North Bay. It was quite entertaining and I was quite bad at it.

Here I am heading out on my second leg. If you look carefully, on the left you can see Erin with her pants on backwards. #rookiemistake

I skied the lead leg, Erin the anchor, taking 3 trips around the course each. Our plan to push the whole way worked well and we were able to ski away from the Carleton team of Alex and Kendra to take the win, Erin’s second of the weekend!

Aaaand it was still really windy.

Next up was the boys race. Victor and Harry also teamed up for the win, Harry’s second of the weekend as well. Here is the start of their final with Victor up front.

Here we are after the race. The other girls glittered their faces and put bows in their hair. They were merciful and didn’t force me to do the same. Much thanks.

After the race my Mum surprised me with some tasty cinnamon buns and some 50% off chocolate. We all know quality chocolate tastes better when you get a good deal on it. If you’d like to know, I ate a cinnamon bun with my breakfast the next day – fuel of champions.

On Sunday we were blessed with clear blue skies and no tornado warnings. It was really nice. The trails at Nipissing Nordic were everything I like in a race course. Long gradual climbs and flats. The end. 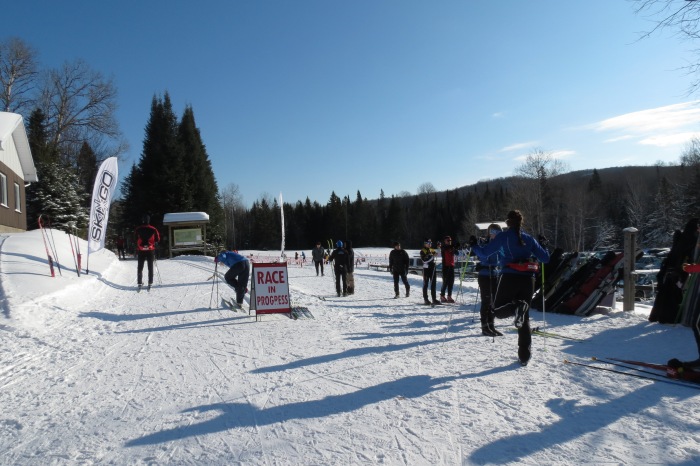 This race was a 10k skate pursuit, based off of Friday’s classic results. This meant Erin would be starting 15s ahead of me, and Alannah 4s behind me. After her there was about 20s back to Kendra and more gaps back to the rest of the field. All of our girls would be starting in the top 10, and ended up finishing in the top13. Here is Bryana heading out.

Alannah lead the charge around our first 5k lap, pulling us up with Erin just as we came through the stadium.

For overall points at OUAs, your best 4 skiers count (just like in cross country running races). Today Daphne was the 4th skier for LU. Here she is following Kajsa from Nipissing. Kajsa competed at the World University games back in December, as did Kendra who finished 4th overall today. 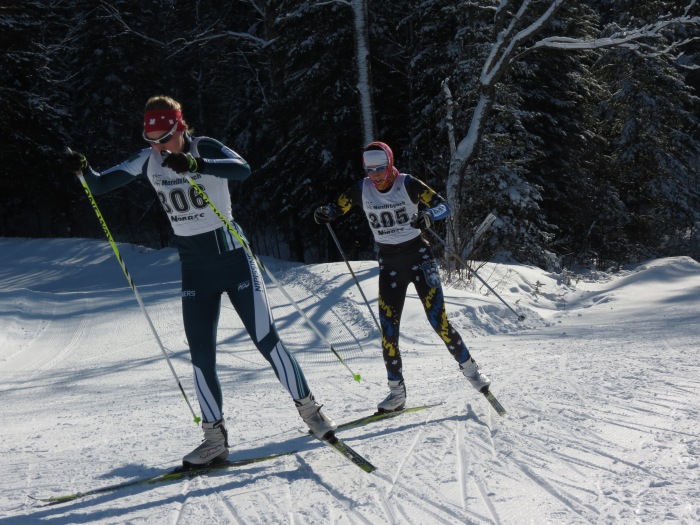 A little further back was a pack of friends, Izzy, Elise, Carleton girl, and Candace!

I ended up following Erin and Alannah until about 2.5k to go when they waved me through to lead. Since I was feeling pretty good at this point, I decided to push the pace a bit and see if I could get a gap on the last bit of climbing. Up through the next few hundred metres I put some space between me and my teammates, and with only flats and downhills to go, was able to pull away for the win.

Here we are about at about 6.5k, just before I pulled away. 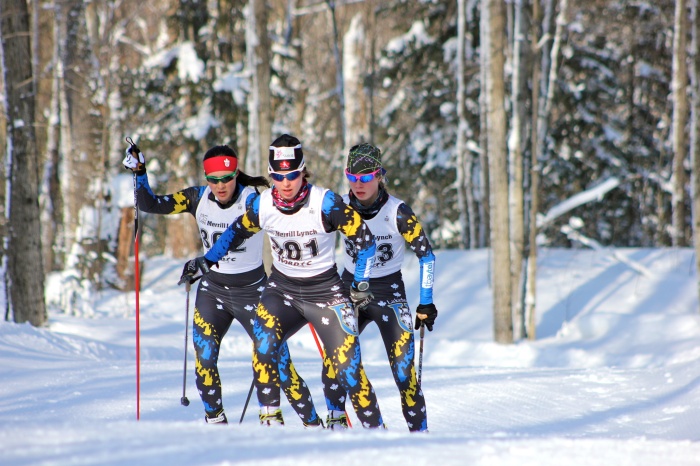 On the men’s side it was another Lakehead sweep, with local boy Greg taking the big W, Harry in second, and Victor in third. Here they are after one (?) lap of their 3x5km race.

And by sweeping all four individual podiums, and taking gold in both team sprints, Lakehead secured both men’s and women’s banners once again. This would be the third consecutive year for the men’s team, and a full decade’s worth of winning for the women – impressive.

I’m very proud to have been part of this result and to be the overall female OUA champion of 2014. Talking to veterans of the OUA circuit, they say it is becoming a fuller and more competitive field. This is great because it means more and more people are choosing to pursue both skiing and school. So many people, when they get to university, don’t continue with skiing because juggling the two can be stressful. I honestly believe that it’s only going to be as stressful, or overwhelming as you let it be. As long as you manage your course and workloads, I think doing skiing and school can be a very realistic goal for everyone.

Anyway, I hope you enjoyed my Hoffman style update. Thank you to Gord Kerr and my Mum for snapping photos this weekend, and a big thank you to the entire Lakehead team, Adam, Amanda, and Steve, race organizers, and volunteers for a fantastic weekend.

Congratulations to everyone who competed at OUAs, and best wishes to all those preparing for Nationals over the next couple weeks.