What I thought was going to be a long lull in racing after Easterns until Nationals is actually not so long or even existent. There is quite a bit of racing going on right now for Canadians, in lots of different places. First and foremost would be in Sochi for the Olympics. Although I rarely plan to, I often find myself waking up just before 5am – my spectator instincts telling me it’s time to tune in for some racing, ready to silently cheer on our Canadians (emphasis on silently – to avoid waking my roommates).

It’s been a pretty disappointing run for our cross country skiers over in Russia so far… It kind of takes away from all the quality racing that’s going on when our people aren’t doing so hot. I mean, I feel crummy watching them fall short of their expectations, and those of our nation, and can hardly imagine what’s going through their minds. I suppose I can relate, to some extent, on what it feels like when you try to jump and reach a big goal, then fall flat on your face (metaphor. kind of). Relate on what it feels like to have desperation clawing away at you from the inside, but not being able to turn pull it out and make it into what you want, what you need.

yah it’s pretty rough, I don’t recommend seeking these sensations. It’s inevitable though, in sport, in life, that you’ll come across them. There are going to be some things that you really, really want, that you ‘need’ – but won’t get. And it sucks; it feels like everything you’ve done to get to that point has been a waste, that maybe you weren’t meant to be here, that you’re doing it all wrong, that you’re inferior and never going to make it… but the thing is (or at least what I’ve come to terms with), it’s not about where you’re trying to go, it’s just about going. For me, with skiing, it’s about going, about progressing, moving forward, keeping momentum, about getting better. aaaaand this is a whole can of worms I wasn’t planning on getting into today! So let’s leave this rather ambiguous topic and get on with talking about SKI RACING.

Right, so, second up is the Scando/OPA “B” Tour thing that some of the top Canadian U23’s and juniors, and the NorAm leaders are doing. They’re somewhere in Euro-land right now kicking butt in Austria, Latvia, and other such places. It looks like a pretty sick trip, some fun racing, and an all around good time. I’ve got to say I was feeling a bit envious… that is, until I heard they were skiing on a 3k slush loop. Not quite the pristine packed powder tracks we have out at Lappe for the OCup this weekend… 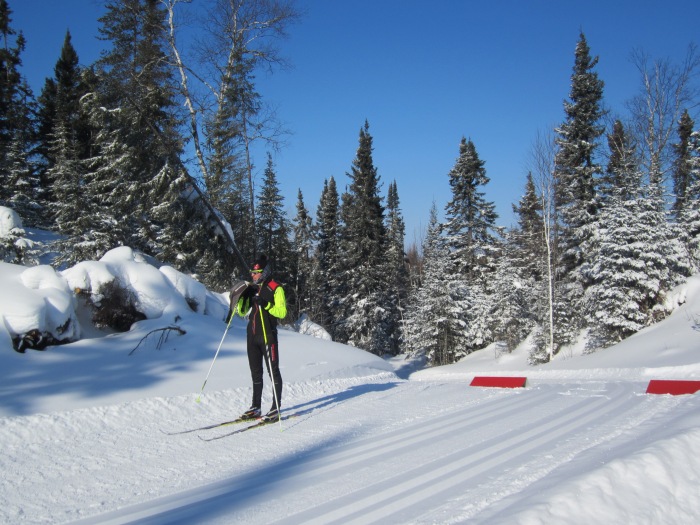 Right now we’re two days into the three day Ontario Cup race here in Thunder Bay. Just under 200 athletes from across the province are here to race this Family Day weekend. For me, it’s been nice to be part of a more laid back, low stress race environment. I think I race better when the races “don’t count” as far as selection and prizing goes. I can take that unnecessary weight off my back when I’m not thinking about those things. So liberating, so simple. I guess I’ll just have to convince myself that I’m at an OCup when I go to Nationals, then I can win the Open sprint qualifier by, like, 11s or something. 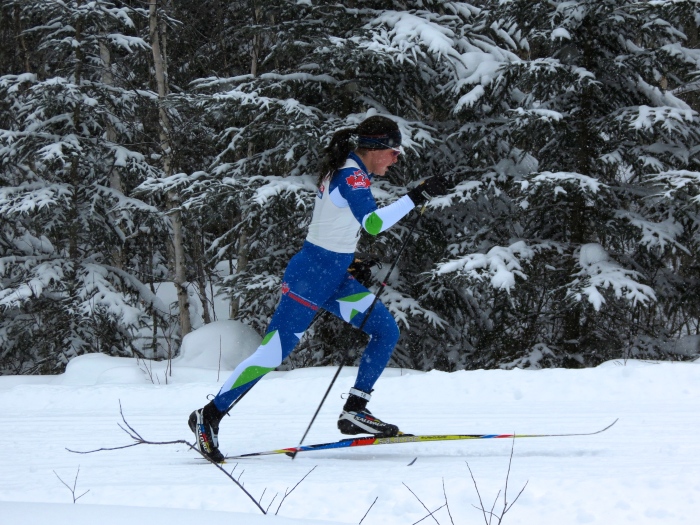 It was a successful day of sprinting for me, competing mostly with my NDC teammates, Alannah and Erin, Alex S. and her Nakkertok teammates, Lakehead skiers, and of course my roommate Katherine (who absolutely crushed me in the quarter final). In addition to maintaining my keeping up the trend of qualifying fast, I also managed to continue my OCup win streak from last season. There ain’t prize money in racing OCups, but the fun and enjoyment I get out of being onsite for these smaller events is an amazing payout in itself.

Daphne (I think?) racing in the sprint qualifier

Also off to a good weekend is my bro Ryan, he made his way into the Jr Boys A final, the only ’97, and finished up in 6th (I taught him how to do that). And today he got to race in his specialty event – individual start classic, this time 10km. He had a super race, finishing 2nd in Jr Boys, 20s off teammate Joey F., 4th in Open Men and only 1minute off race winner Harry S. – also a Hardwood skier (yah Hardwood, yah). Super proud. Can’t take credit for teaching him how to do that.

Ryan on sprint day, double buffing like a champ.

Now, now, what else happened this weekend. Oh right! Today in my 7.5k classic I finished 2nd overall only 2.1s behind Alannah! (if I knew it was close… #famouspostracequotes), and 1st junior. Pretty solid day for me. I think this weekend of racing is what I needed to jumpstart the system and get ready to put in some more intensity. Racing on just base and with no spunk is weird, it feels like I have the fitness to race back-to-back 50k’s at the Gatineau Loppet but would lose a 50m dash to a 4 year old (bc no zip or snap).

Speaking of the Gatineau Loppet, that is also happening this weekend over in Ottawa. NorAm racers Colin A. from Whitehorse, and Marlis K. from Foothills took top spots in the 50k classic yesterday. My Dad has done to 50k skate a couple times, not this year though since he’s here doing some waxing, but I’m sure he’ll be checking the results to see how things went. I’d like to loppet a 50k sometime, when I asked about the Sleeping Giant 50k Timo said “No.”, but I’ll do one eventually. Probably during what is sure to be an epic master-blaster career when I’m done racing.

Julian will never be a master blaster because he has boundless amounts of youthful energy. He is also stoked about his sprint medal.

What else, what else, what  else… Westerns out in Prince George had a small showing, but by the sounds of it the courses should be top notch for the Canada Winter Games next year.

ah yes, Super Tour down in Minnesota for some of the boys. Four of our guys, Andy, Bob, Nick, and Evan, went down to St. Paul to race a 15k classic mass start and 10k skate individual start. They had a solid showing, Andy was 6th in the 10k skate today, and Evan was 10th (top U23 and Junior respectively, I think). They’re on their way back to Thunder Bay now and if they’re feeling well will join the crowd tomorrow for the skate pursuit/mass start.

Well, it’s nice being back at an OCup, to see everyone, and to do some ‘lax racing. Next up in this anti-lull of racing is Ontario University Champs (OUA’s) in North Bay. It will feature a classic interval start, skate team sprint in the downtown, and a skate pursuit based on the classic race. After OUAs is the Sleeping Giant Loppet, then out east to Cornerbrook for Nationals. I think I’ve said it before, but it feels like the whole season has blown by and I’m just getting warmed up. … Not entirely true, but it has been milder here in Thunder Bay, which is a treat for the races. This warming weather has me starting to look forward to summer training; long sunny rollerskis, hiking, glacier skiing… I can’t wait (for serious).

Oh and here’s a little promo video Nippising put together for OUAs,:

It’s Reading Week for Universities now so there may be another update next weekend on OUAs. ’til later.