adventure ski (/ədˈvɛntʃə skiː/) : an excursion done on cross country skis, usually without a route or destination in mind; an epic NDC outing that typically involves getting lost or losing people.

Yesterday evening I was greeted with a team text informing me that our roller ski intensity was being scrapped and that we were going to go skiing instead.  Not quite believing my luck, I ran to the nearest window and peered outside – no snow.  huh… 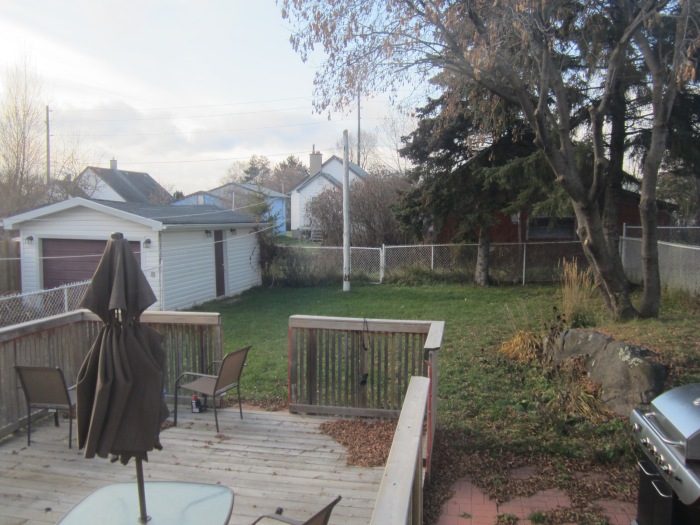 conditions in my back yard today

My next course of action, in true SOD skier fashion, was to pull up about 8 different weather forecasts and radar maps on my computer to check for any possible signs of incoming precipitation. Still, no snow.

Normally I would be quite skeptical, given the serious lack of evidence of there actually being any snow in Thunder Bay, but when it comes to snow – Timo knows. So at 7:30am the van made its rounds to pick up the team and we were soon on our way up and out of Thunder Bay (can’t actually tell you where we went – top secret).  I guess I wasn’t the only one who was caught by surprise about our skiing excursion because Nick still hadn’t mounted bindings on his rock skis and ended up doing it as we drove out. 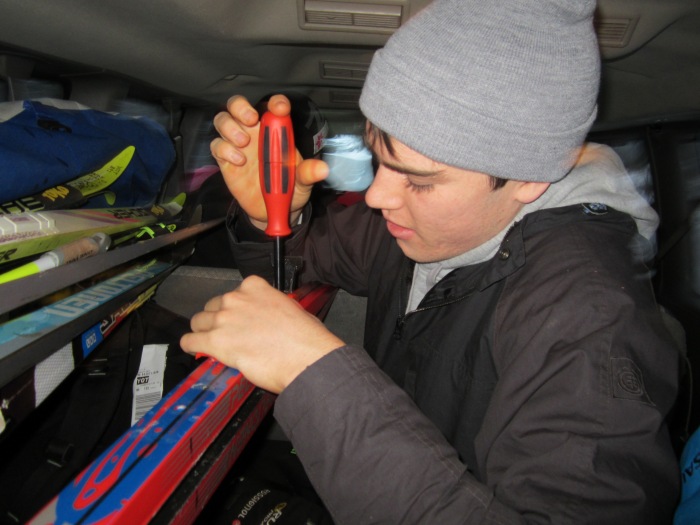 It wasn’t long before we started to noticed considerable amounts of snow along the shoulder of the road (considerable by SOD standards). After a surprisingly short drive we turned off onto some sort of side road/path that hunters probably use to get further away from the woods – and sure enough, there was snow. 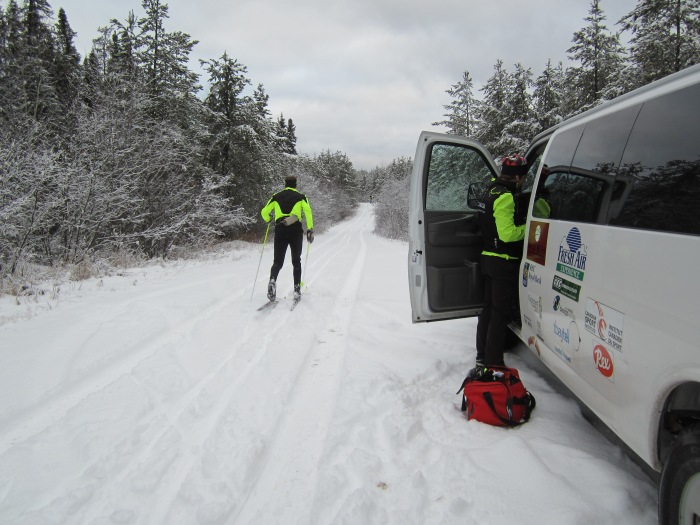 Well I won’t bore you with a play-by-play of our 3 hour trek through ankle deep snow, but I will mention a few highlights for the day:

fellow rookie Benjamin is pleased by all the snow

thanks to Bob for being tall and snapping this pic 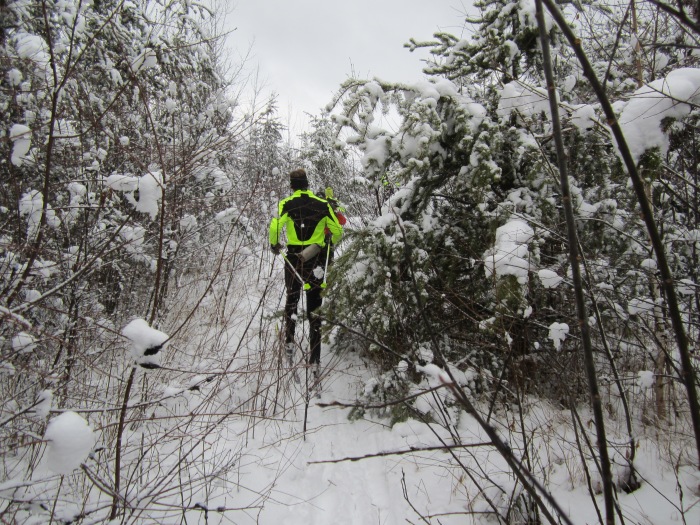 making our own trails

Okay here’s a link to a video Vic took during our adventure ski today.
For context: we’d been bushwhacking for quite a while when we came upon a rather steep downhill. I want to emphasise that this is a pretty sketchy, narrow path that you had to crouch down to get under the tree branches for while avoiding cantaloupe sized rocks on the ground. The part at the beginning is me, Alannah, and Vic waiting to go down the hill (the boys had already gone and we’re not entirely sure what happened to them – there was a lot of yelling of profanities, and crashing sounds going on), and the second part is of Victor’s descent. You’ll have to watch and see what happens, I don’t want to spoil it for you :)

He claims his feet didn’t even get wet

We were told to wear bright colours in case we encountered any hunters. Thanks to OneWay for keeping us safe. 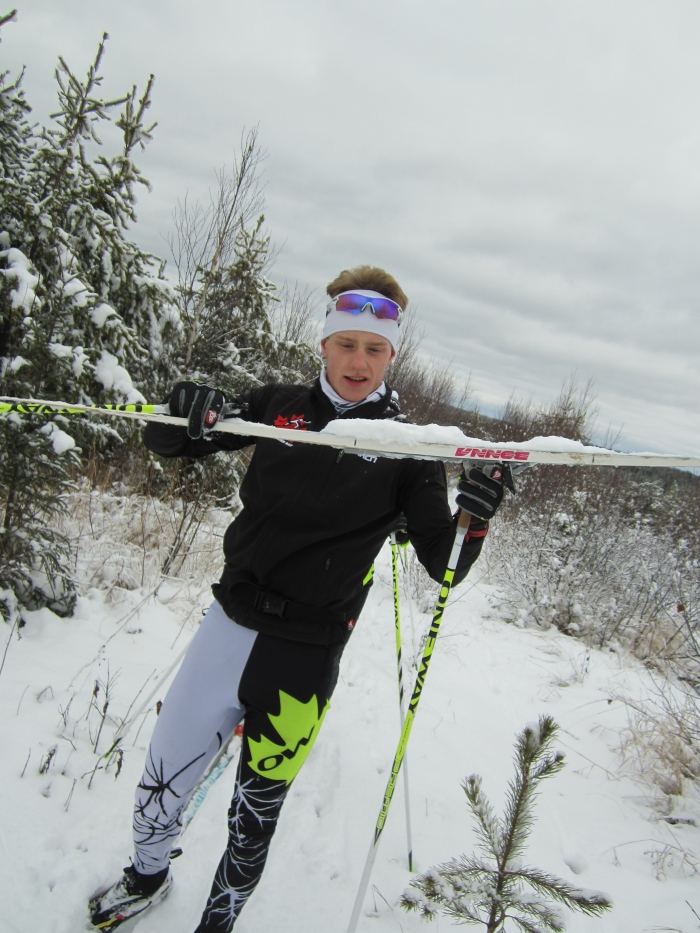 Jack did not give a 5/5 wax rating

Cool, so I’m pretty happy right now. Things are going well, we are indeed skiing here in Ontario, school is all under control, everyone team is doing well minus one :( (Erin please get healthy asap – but when you do please do not let it stop you from profusely cleaning the house and baking things), and there’s less than a month until the first races of the year – crazy!

Hopefully there is snow wherever you are reading this, I’m already thinking about a white Christmas – but there are still things to do before then! Nordic Fest is coming up next weekend, it’s a big fundraiser for the NDC and (from what I’ve heard) sounds like a real fun event. So if you’re in Thunder Bay next Saturday (the 16th) and are looking for a meal and silent auction, then come on out and join the crowd. Tickets are probably all sold out by now, but if you kneel on the curb and beg nicely they might just let you in.

Big thank you to Salomon and SkiGo for setting me up with some fresh gear for this season, to Barrie Honda, the SOD, and Dungate Windows for financial support, and to all of the people who have contributed to my race sponsorship program. I’m really excited (and kind of nervous) about having so many people backing my skiing this year, it’s already made a big difference in what I’ve been able to do in preparation for the racing season. So I guess now’s the time to pull it all together and hopefully throw down some wicked awesome races.

oh and thanks to my Mom and Dad, and my grandparents   I mean thanks  …

THANK YOU TO MY FAMILY FOR ALL YOUR LOVE AND KINDNESS.
Mom, Dad, Grandmas, Grandpas, Aunts, Uncles, other relatives, and friends – thank you for helping me get to where I am now and for encouraging me to keep going forward to bigger and better things.