phew, I made it. Made it though six consecutive weeks of school, made it through a day of death, and made it to Calgary.

Saying that ‘I survived six straight weeks of school’ probably sounds like I’m being overly dramatic to you non-athete folks, but I’m sure my fellow active enthusiasts know how I feel.  Being an athlete is great because you get to go on trips that break up the monotony of the ol’ school routine.  This past week in particular, it felt like I was just slogging along, not very motivated, barely getting by,  – stuck in a rut, as some might say.  No worries though, because as soon as I was on my way to the airport I seemed to snap right out of it. It’s crazy how a simple car ride to the airport can be the trigger that takes you from a “meh…” to an ‘eff ya!’ on the mood scale of being “not quite dead” to “(eff ya!)^2”. So I guess you could say I’m pretty amped to be in Canmore now for some onsnow training.

Before I left Thunder Bay, our team got down to business with a week of testing. We did most of the same tests that we did back in the spring during our kickoff camp – 3k uphill run, strength testing, a couple roller ski time trials, and instead of another incremental workload test we did the Pancake Run. 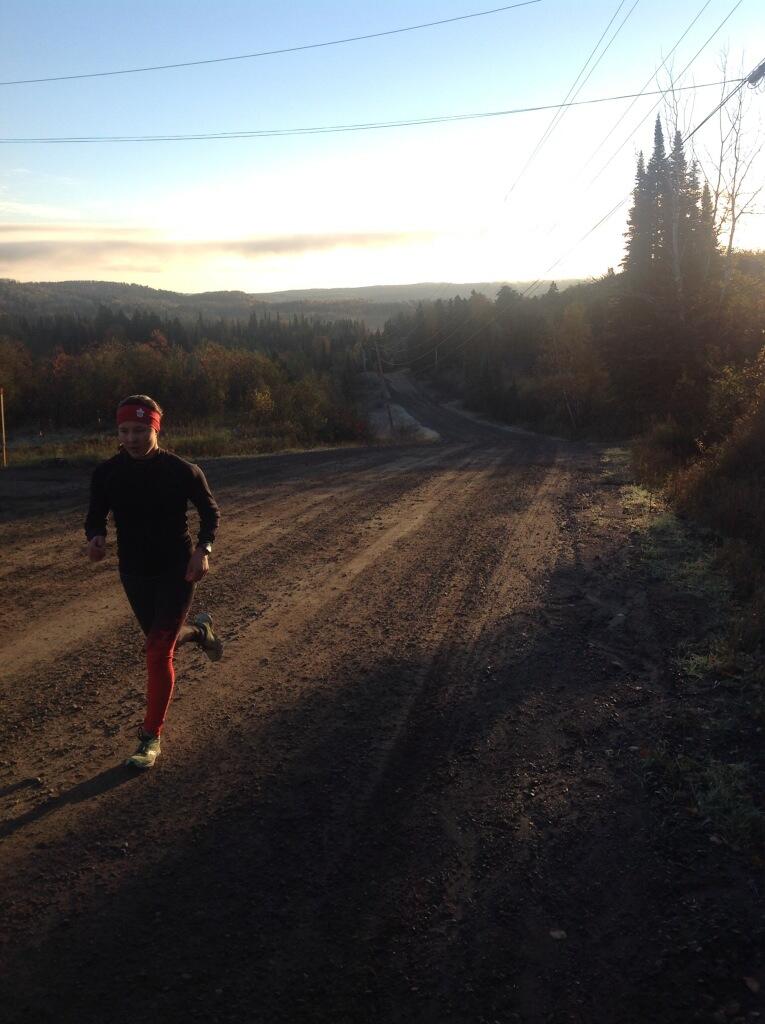 All in all, the testing went quite well for me. Since the spring I knocked over 45s off my 3k uphill run time, 28s off my skate TT time and nearly 40s off my double pole TT.  The rest of the team also saw lots of big improvements, which is awesome (and nice to know that all the training is actually working). Special mentions to Alannah for chopping over 2 minutes (citation needed) off her 3k uphill time, and to Andy for not getting completely girl-ed in the strength testing.

In my opinion, the Pancake Run is a great improvement on the incremental workload test for a number of reasons:

a) it’s not on a treadmill
b) no one is stabbing you for lactates
c) you may be rewarded with free pancakes if you run really fast.

This year three people were really fast and have been rewarded for their speediness with a year of free Lappe pancakes. Check out the article about it on FasterSkier here. Please note that since I did not meet the pancake criteria that I am seeking an alternative flapjack sponsor for this season. If you are interested in supporting me on my quest for a sub 1hr Pancake Run time (and my other ski-related goals), please send me an email via the Contact tab above. I will provide direct feedback on the product, write product reviews, be an ambassador for the product, eat the product, and try run faster next time (seriously though, I’m looking for sponsors).

pancakes in all their glory

Wow, so you will not believe how unbelievably unfortunate of a day I had last week. I have decided that it may very well be the most unfortunate days of my life. I don’t want to dwell on such a dreary topic so you’ll just have to take my word on this one.  As it is, I’m not a very good story teller anyways…

Despite my terrible luck that day, I still managed kept my head on straight. It was one of those days where you’re beyond the point of being upset or depressed because it’s almost laughable how bad your luck has been (Murphy’s Law had never rang so loud in my ears). That said, don’t laugh at people who are obviously having a crummy day because they might punch you in the face (I didn’t punch anybody in the face on Tuesday).

One good thing that came from this incredibly unfortunate day did was that it gave me reason to celebrate and enjoy all the small positive things that happened to me in days to come. Suddenly, being able to ride to school without getting a flat is awesome. Not having to pack raingear for training is fantastic. Not crashing while roller skiing is wonderful.  Going back to where you left something and it still being there is super. Coming home and having a key so you don’t have to break in is incredible.  Getting on an oversold flight was amazing. Being upgraded to first class was uber amazing. (okay running out of adjectives…)

There are all kinds of things of little things, but I won’t bore you with my excitement over figuring out how to reprogram my calculator, or finding a sock I thought I lost, or getting the Economist Sci&Tech section in the mail from my parents… but it really is incredible how being happy about even the most little, seemingly trivial things can make your day so much better. So my advice if you’re ever having a rough go – smile and laugh it out. A genuine smile and a good laugh can actually improve your mood.

Rad, so I’m in Canmore now. I flew out a few days before the rest of the NDC hit the road so I could be in town for the start of a training camp I’m doing with the rest of the Junior and Senior Women’s National Teams.  Over the next few days we’ll be training out on the Frozen Thunder track. It feels like all of Canada (and a bunch of Americans too) have conglomerated here in the centre of the universe for this on snow opportunity.  Skiing around the loop with WC skiers and biathletes blasting by you is pretty cool (and I’ve gotten really good at being tracked).

Well, since some reasonably interesting stuff is going to be happening over the next while I’ll probably be putting up another update before I leave Canmore. Until then, enjoy these few pictures.

race plan for the Pancake run

ripples in the sky

One thought on “Wanted: Pancake sponsor and snow”