After taking a peak at my calendar I came to realise a few things 1) since I moved out I’ve spent more time in Austria than in Thunder Bay, 2) there are only 99 more days until my first race of the year (yikes!), and 3) it’s nearly time to go back to school. Crazy!

Right now I’m ‘home-home’ in the SOD – that’s Southern Ontario Division, for you nontario folk. The main reason for the trip down was the annual dryland camp put on by my home club, Team Hardwood.  Along with some of my fellow NDC-Hardwood alumni and coach Victor,  I made my way down to help out with the camp and to do some outreach.  It was a bit weird for me to be on the coaching/leading side of things rather than being a camper.  There were a few times where I would be working with a coach and athletes when the coach would ask me to provide some technique advice and I’d do a double take because I still don’t feel like I’ve really nailed the technical aspects yet (thought quote: “are you sure you want my advice?, have you ever seen me double pole?”).  Joking aside, I don’t think I made anyone’s technique worse.

It was a full house at home during the camp with a few extra bodies laying around between workouts.  A quick summary of what happened at our place: Scott and Ryan pounded back nearly 2kg of cereal for breakfast over the course of the 5 day camp, we jammed hard to T.Swift everyday enroute to training, we all sweated like a pigs on a spit at every workout, and the basement reached a record breaking level of dank-stankness. 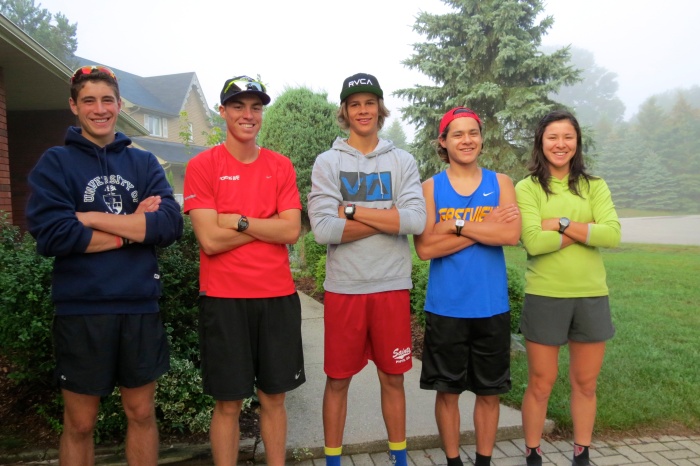 (and for the record, the driveway slants downwards towards the road)

The camp started on Saturday and ran through to Wednesday. The schedule had a mix of rollerskiing, strength and stability, ski striding, dodgeball, and time trialling.  There were over 60 athletes and nearly 20 coaches present, all helping to make the camp a great success. In addition to high quality training there were also some top notch presentations by Jack – who talked about the four tires of performance (physical, technical, tactical and psychological), Pav – who talked about lots of stuff like how to make the OST (she basically just read my blog post aloud), enduring qualities of skiers, and how to be an awesome teammate, and even us NDCers chatted about what training centres actually are, practising good time management as a student athlete (lots of hypotheticals here), and I think we tried to talk about the key mental aspects of preparing for races, racing, and reflecting on races too. 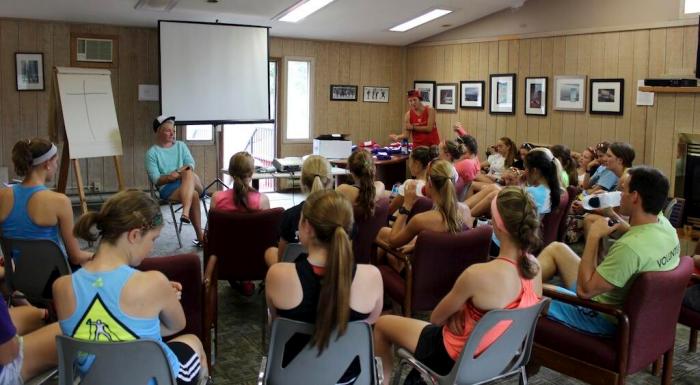 Okay, here is a round up of some wonderful photos from Graham Perry (& Shaun), Gord Kerr, and Marianne Valjas of the training camp. I was kind of lazy and didn’t get many pictures of my own so thank you for helping document the week! 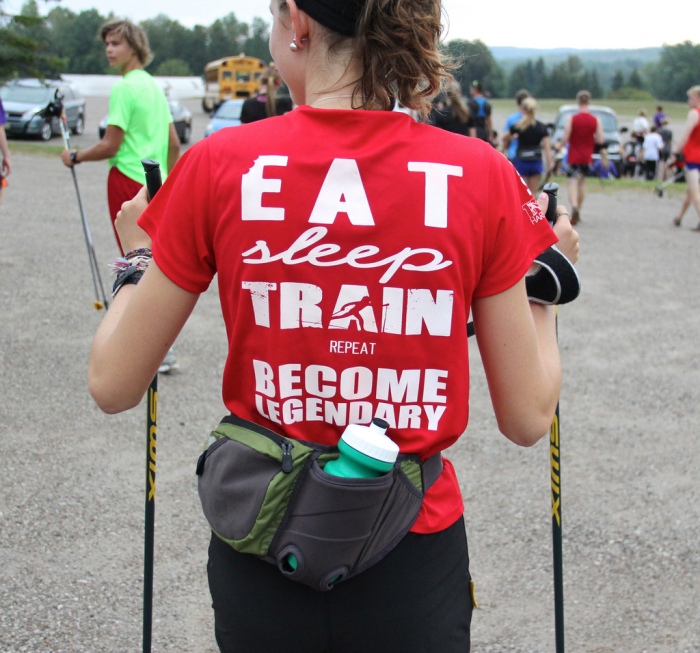 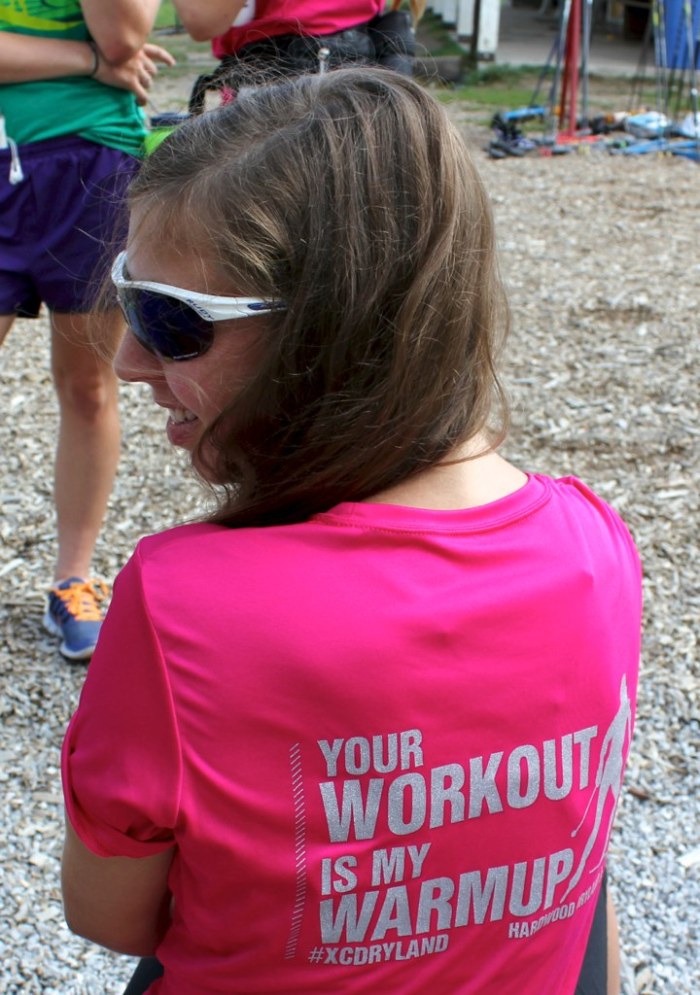 The SOD shirts are slightly more subtle than the LSSD “LIKE A BOSS” shirts, but the sass level is still on the rise – can’t wait til next year. 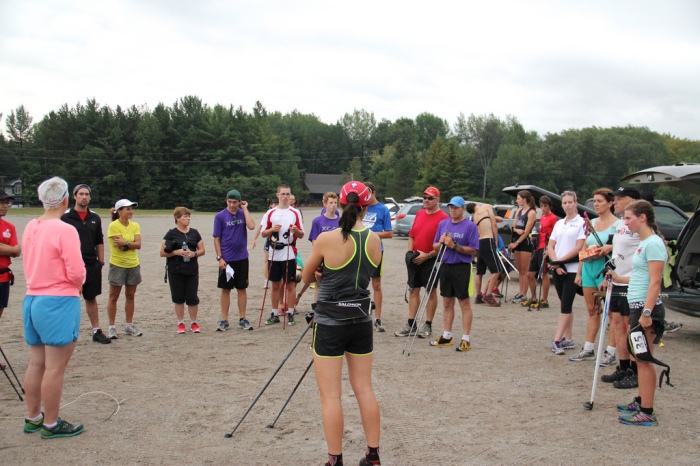 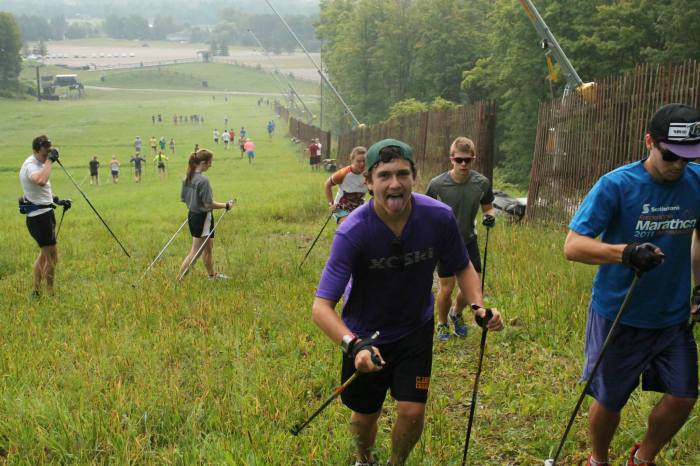 Robert being a goof

Monday’s workout featured a hill bounding/striding intensity workout at Mount Saint Louis but was cut short because of a nasty lightning storm that rolled through. Athletes were shuttled back to the residence buildings and games of dodgeball, indoor soccer, and basketball were arranged as an alternative means of finishing the intensity block. 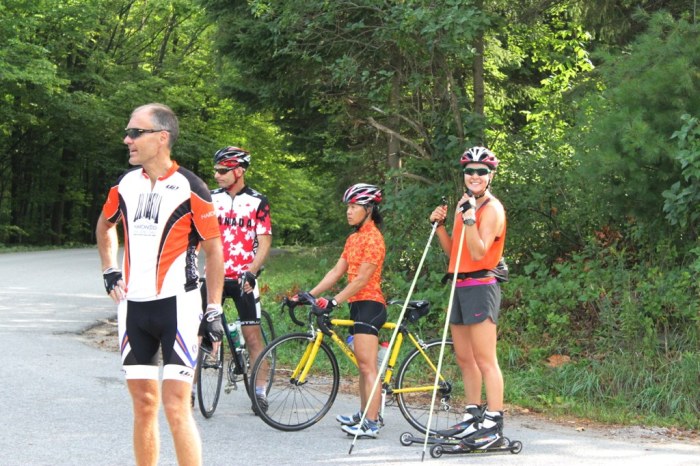 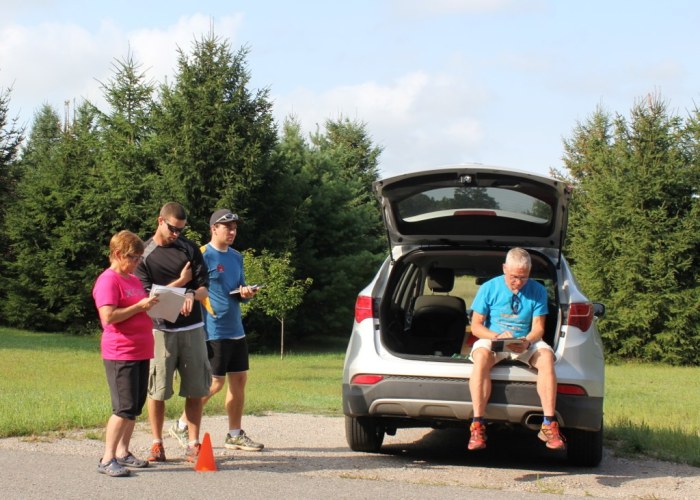 timing crew for the rollyski TT

The last session of the camp was a 6.6km rollyski time trial. It was a super tough race and there were some blazing fast times (and lots of people bemoaning the fact that their skis weren’t as fast as others). Just like for the rest of the week, it was stifling hot and disgustingly humid. Sparing details – there were a lot of very sweaty people.

So while it was no New Zealand Snow Farm training camp (I guess my invite from the NST got lost in the mail or something?), this was definitely a productive 5 days of work from all the athletes and coaches. I’m excited to see all these motivated young (it’s a relative term) skiers out and ready to work hard. I think Ontario is making some great progress in developing our juniors and I can’t wait until the race season rolls around to see it all unfold!

Well, it’s time for me to switch from blog writer mode to paper writing mode because university is about to get started and I don’t think this informal, run-on writing style is going to quite cut it. Thanks for reading, next update when something exciting happens!