Yesterday afternoon I touched down at YYC after some anxiety over whether or not I was actually getting on the flight and if my bags were going to show up.  I figure that if you can get on a plane, not have any serious delays and have your bags show up at your destination then its was a successful trip. Initially my plan wasn’t to fly out until Monday, but there were some complications with seats available on the flights so I ended up making a quick decision to head out a day early.  Thankfully everything worked out and my friend Shelby was able to give me a ride and place to stay in Canmore.

After an exhilarating trip to the grocery store (we even got a pumpkin!), some rad beats and many swapped stories we settled down for a delectable dinner.  For whatever reason, breakfast always seems to taste better at dinner time (IMO).  Then we went out, hit the clubs downtown, went skydiving and hunted some grizzly bears before crashing out for the night.  Nothing really worth talking about.

The plan for today was fairly open ended so I spent the better part of the morning diligently doing my homework (for serious).  As exciting as that was, there were more important things that needed doing.  Like carving pumpkins…  After extensive investigation and research for the perfect pumpkin face, we put our artistic abilities to the test.  Here’s the result. — oh yeah, we’re wearing Team SledgeHammer headbands/bandanas.  If you’d like to become a member of our equipe please inquire for details and application requirements.

Despite our successful jack-o-lantern carving session, we agreed that we’ve still got a lot of room for improvement and opted to go skiing rather than honing our newfound skills.  WHAT?! Skiing? in October, in Canada? you say.  Yessir, Frozen Thunder is up and running as of Saturday here in Canmore.  It’s pretty legit.  At the end of the regular ski season some crazies pile up A LOT of snow and bury it in sawdust and leave it there over the summer.  By the time autumn rolls around and people are rearing to go they go, dig it up, and have it laid out around a 2km loop at the nordic centre.
It was quite warm when we went out, probably upwards of 10C.  Needless to say I was feeling rather nostalgic during our ski.  The soft conditions were all too similar to the last time I was on snow, back at MSA Nationals in March.  Granted, there were far fewer people out on the loop with us today than there were racing around at Nationals…  Most of the skiers probably go out first thing in the morning.  It makes good sense too, it would be much cooler and hopefully a harder track to ski on than in the afternoon.  Guess that means early mornings for the rest of the week (hoo-rah!)…

That wasn’t the only cool thing that happened today. Shelby and I went for a pleasant stroll around town in the afternoon and made a few excellent discoveries… Namely my future car. 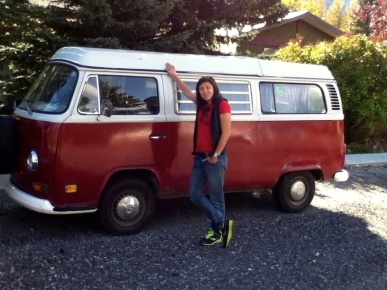 its meant to be, right?

I plan on (at some point in my life) acquiring a similar vehicle and travelling the Americas.  It seems a major cliche for teenagers/young adults/anyone to say that they “want to travel”.  Honestly, everyone wants to go backpacking someplace, go to Europe, Asia, whatever.  Not going to lie, I’d love to do that too.  But why would I get up and run away overseas when there is so much here in Canada that I haven’t seen yet either?  Travel is travel though, wherever you go.  I suppose the point of it is to see new things, meet new people and go new places.  If I ever get the opportunity to pack up and head out on some kind of adventure I wouldn’t make plans.  I think I’d just get up and go.  … Okay so I might want to get a general idea of where I wanted to end up, but I won’t be the one to tie myself to a schedule or plan of attack.  That’s part of the adventure, right?  Not knowing whats coming next.   yeah so if you’re interested in being my travel partner for this haphazard, rubber burning, road raging adventure, let me know.  I’m pretty sure these little vans only have two seats so we’ll be great pals by the end of this.

Well thats it, thats all.  Looking forward to being out on snow this coming week, taking in a little bit of new scenery and training with some different people.