Spring is the season of new beginnings, growth, life and happiness.  Well, that’s the cliched version of what spring is for most normal people (correct me if I’m wrong).  For me spring is the time of horrendous allergies, running in ovular loops, late assignments and sun burns.  Okay, so that’s not the most positive way to look at it… Seriously though, for me, spring time is usually about track, allergies, sunscreen, the start of ski season (yes indeed non-skiing folk, cross country ski season starts on May 1st), and finishing off the school year.  I think that’s it.
So let me run down some of the stuff I’ve been up to lately. 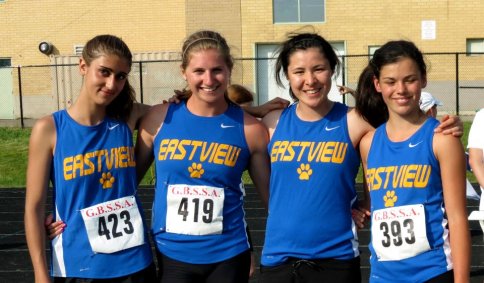 woo-hoo relay team is OFSAA bound ! (I managed to sneak in for steeple chase as well)

Fun fact:  OFSAA Track & Field 2012 will be my 11th trip to OFSAA and I’m just finishing off grade 11. huh, not too shabby.
Another fun fact is that for the three times I’ve been to track OFSAA I’ve raced in three different events.  In grade 9 I made finals in the 1500m, grade 10 was in the 3000m finals and this year I’m looking for some results in the Open steeple chase event.  I really like steeple chase because it’s not just plain old running.  Track isn’t exactly my calling, actually, I find it rather boring.  But my parents aren’t too keen on my playing rugby, I’m a horrendous soccer player and … I don’t really know why I don’t play Ultimate.  Maybe I’ll do that next year!  Anyways, I like steeple because you don’t have to run as fast as the people in the 1500 and 3000 do and you get to jump into a large puddle of water and negotiate some very stable hurdles.

this was a pretty good time, and I’m getting pretty good at travelling solo now.  It started off with a drive to the airport, flight to Ottawa, bus to train station, train station to the university.  Planes, trains, automobiles, bus and foot people. – it gets you places.  I lot of really awesome stuff went down during this testing camp, so please try and understand that I die a little bit every time I have to leave one of these camps.

So skiers, until next time… may fate be with you.